This illustration, below, depicts some of the major changes that had to be made to turn the Soviet-era Admiral Gorshkov into the future flagship of the Indian Navy - Aircraft Carrier INS Vikramaditya.

It appeared in the latest [December] issue of the Geopolitics magazine. 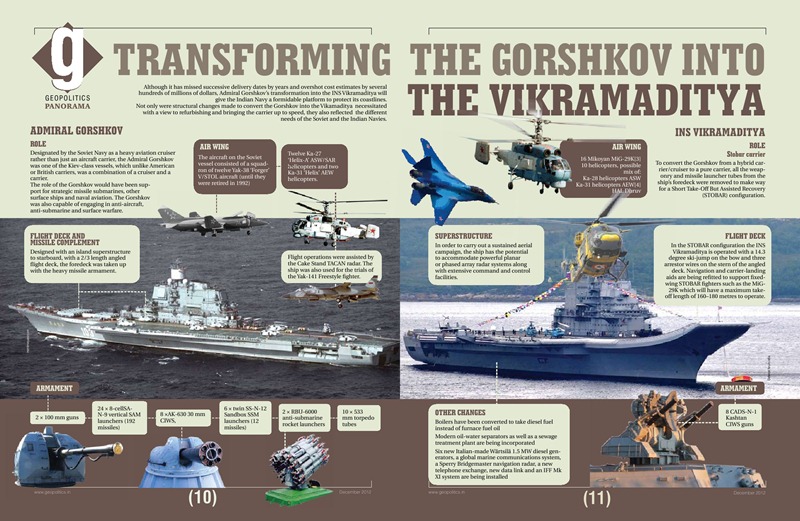 As things stand today, Russia now says it can hand over the Aircraft Carrier to India only towards the end of 2013, from the August 2008 it had assured at the time of signing the contract. A delay of more than 5 years, assuming they even manage to fix it by then. India had even proposed invoking a clause present in the contract to impose penalties amounting to $115 million USD on the Russians for the delays. Much deserved, but the Russians have refused to honour the clause. India's massive dependence on arms imports, with Russia being a major source for procurement, precludes it from ensuring that the Russians pay up. Also Russia's willingness to transfer certain type of weapon systems [in lieu of much needed dollars, of course] to India, that other countries would be unable to, means the terms of engagement shall always be dictated by the Russians. India has only to blame itself for the woes Russia has been subjecting it to.

Publishers of Geopolitics have made available, online, all issues of their magazine to read for free, including their latest issue. If you aren't a student and take to reading it regularly, do subscribe to its printed edition.