This iconic photograph, in many ways, symbolises all that India was, what it aspires for itself & the path adopted to attain its goals, still quite a distance away, remarkable strides notwithstanding. Seen in this photograph is the nose cone of the French Centaure Sounding Rocket being transported to the launch pad at Thumba in Kerala for the first launch of a Rocket, following the official inauguration of the Thumba Equatorial Rocket Launch Station [TERLS] there.

Click on the photograph for a higher resolution picture 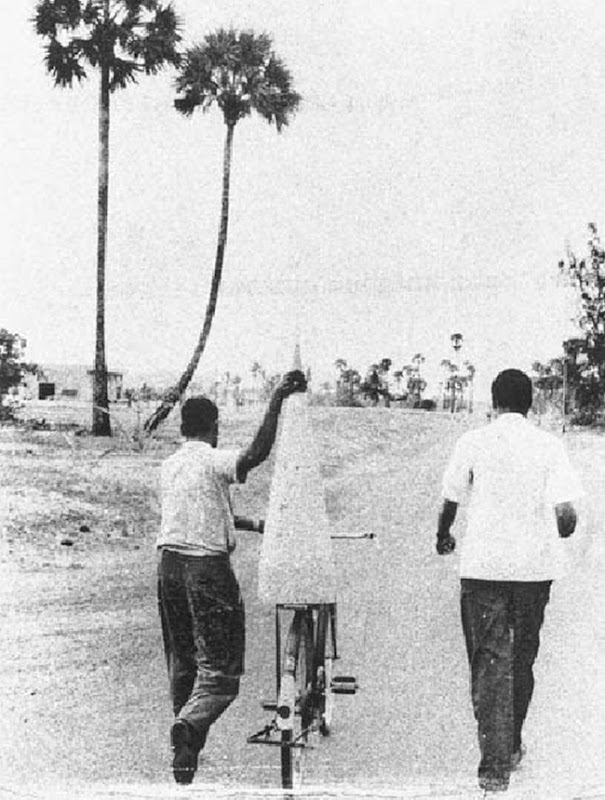 Can you identify the two gentlemen here who had been tasked with this responsibility? If any mishap were to have occurred during the course of their journey, all the preparations made as part of the showcase event of inaugural function would have come to nought. One of the two individuals rose up quite high through the ranks, while I'm unable to find information about the other.

Update [2012.04.22]: The answer to this question, I found in the book, "Nucleus and Nation: Scientists, International Networks, and Power in India"1, 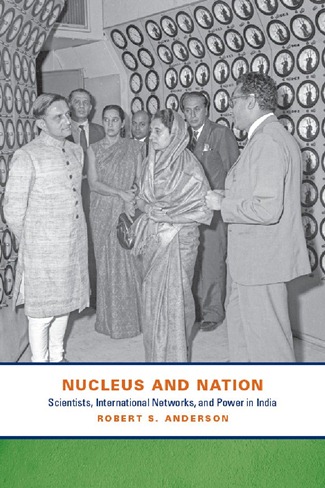 "The nose cone of a rocket being wheeled carefully to the launch site. When Prime Minister Gandhi formally opened the Thumba equatorial rocket launch station in February 1969, there was inevitably a large entourage of prestigious visitors, all expecting special treatment. Consequently all the space agency's jeeps and light vans had been commandeered two hours before the 6:00 p.m. launch. "I had been totally forgotten by our Administration in the VIP rush for vehicles," recalled C.R. Sathya. The nose cone for this French Centaure rocket had to be walked with its sodium vapor payload, carefully for two kilometers. The famous French photographer Henri Cartier-Bresson also found a bicycle as his "official" vehicle, rode around the site before the launch, and stopped to click this photograph of rocket engineer C.R. Sathya and instrument maker Velappan Nair (holding the nose cone). This rocket flew to a height of 145 km. Ten years later the space agency ISRO was ready to launch its satellite on an Indian rocket, but the second stage of the rocket failed on the first attempt in August 1979. A year later in July 1980 an Indian satellite was successfully lifted by an Indian rocket to an orbit beyond 300 km. Courtesy of the Indian Space Research Organization"

"In February 1969 I observed a rocket launch at Thumba; with the planned launch for 5:30 p.m., one hour before sunset, it was still hot at 5:00 when onlookers like me were admitted to the site. I sought the biggest coconut tree to stand behind, looking up carefully to avoid the spot on the sand where a big coconut could drop on my head. Because I am not a "somebody" in the rocket community, I found some shade and obscurity behind the tree. Most of the people watching the launch with me had spent the day working feverishly in hot concrete sheds and workshops. The entourage that arrived at 5:15 around the leader Vasant Gowarikar swelled the crowd. He had been backstage making sure everything was going to work satisfactorily, backed by others to ensure that he would be closely identified with the launch; was this to make it a team success or team failure? Right on time at 5:30 a man on a bicycle arrived with the nose cone, and it was carefully lifted off and fit-ted delicately onto the Rohini rocket, with occasional shouting to overcome the noise of the wind from the sea? Then the flight boss Gowarikar looked around and whispered something to the man next to him, and the same guy who brought the nose cone on the bicycle was dispatched to chase the small herd of goats away. This was done quickly, in sharp rude Malayali, and everybody laughed nervously. This was, after all, the first fully Indian test rocket. More checks and double checks, Gowarikar and team looked at each other; it was 5:45, and the bright light of ignition and roar of the fuel consumed us. In a few seconds it was gone past the trees and gaining speed, every second. People held their breath, literally, "hoping it would not crash in the sea," as one engineer told me later. Ten seconds more and it was al-most out of sight. Clapping and shouts ended the launch, just like the end of a cricket match. Gowarikar wiped his brow, the goats returned to graze as the crowd faded away in the sunset, and, ignoring the goats, the bicycle man wheeled his bike away, laughing with friends"

There appears to be some discrepancies in this narration, though. This description above states that it was an indigenously developed Rohini sounding rocket that was launched, while the caption accompanying the picture above mentions the rocket to be a French Centaure model. Moreover, it also mentions that only one person with the bicycle accompanied the nose cone, while the picture shows & names two individuals2 . This record of sounding rocket launches from Thumba states that only one launch took place in the month of February in 1969, so both the description & the photo caption are also likely of the same launch. The most likely reason could be that the record I referred to is not exhaustive & another launch did in fact take place that month of the year. Perhaps reading the book would offer further clarity about this. Yet to read it myself. If you know more, please let me know, too.

In the Space Technology domain, this photograph appears to convey a message as powerful as the photograph of the sailor kissing the girl in Times Square. People who did not become famous in the conventional sense, going about their duty, engaged in action, unaware of the forceful symbolism & lasting impact it would have when captured on camera.

Another masterpiece of a photograph from the book. This one shows Dr. Vikram Sarabhai appearing to listen intently while Dr. APJ Abdul Kalam describes the operation of a filament winding machine, while a young Dr. Madhavan Nair, later Chairman of ISRO, looks on. 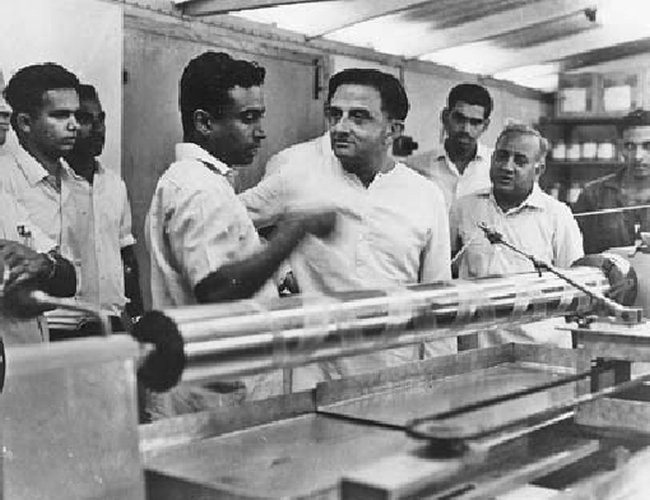 "Sarabhai discussing a filament winding machine with Abdul Kalam, program leader for the satellite rocket and later president of India, Madhavan Nair, later chairman of ISRO, rocket engineer S. C. Sathya, and H. G. S. Murthy, later director of the Thumba equatorial rocket launching station in January 1968. Though a hand-turned filament machine had just been rigged up, Sarabhai asked the group to develop a mechanized one to produce nonmetallic fiberglass nose cones needed to encase and fly magnetometer payloads. Sarabhai promised to have the new winding machine, incorporating an old car gearbox, switched on by the prime minister in February 1968 at Thumba, but prior to that formal occasion, he wanted to make sure that the machine worked properly. Sarabhai involved these colleagues in reengineering a Soviet rocket engine and reengineering French and American rockets; he was briefed regularly by Kalam concerning a Defence Ministry missile project. A site for eastward long-range rocket and missile launches was being chosen and developed at his time, just north of Madras. Sarabhai died in 1971, before he could see an Indian satellite go up—something he worked on since 1962."

1 = It was nothing, but sheer accident through which I discovered this book. As I was preparing to make this post, I was unable to recollect where the PDF file that I have embedded in it. So I ran a search for the word 'Scientist' to look up that file name. As luck would have it, this book too contained the same word & it showed up in the result. Unaware since when I've been in possession of this book. Definitely on my reading list this June.

2 = perhaps, the other person, likely Mr. C.R Sathya, broke off for some other task at a point after the photograph was taken