A collection of links to stuff I read or plan to read this weekend [extended weekend actually since Monday is a holiday on account of Eid....w00t].

How to create, edit and remix audio files without installing any software?

Scenario 1: You are an upcoming musical group, perpetually broke [and possibly on dope], who need to edit and jazz up their demos and make it presentable in the hope that the record labels hear it & think of you as the next BIG thing [after the bubonic plague]. If these weren’t bad enough, you have even developed a conscience lately - so no piracy for you.

Scenario 2: You are stuck in a land far, far away with a terminal that has given you no install rights [an e-dhimmi, you are] and you want to to mix up a cheesy, sappy one of a kind lurve track for your girl that you think might just break your dry spell [you are so very wrong there. But again, they being them, I might be the wrong one here].

So what do you do? 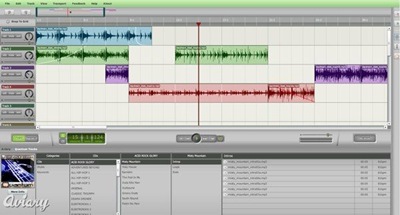 The company have this to say about Myna,

“Myna, a powerful online audio editor, makes it simple and easy to upload, record, and remix audio clips online. Whether you are new to audio editing or a professional you can get started right away on Aviary.com.”

This flash-based online service seems to offer some pretty good set of editing features for people to use and play around with. Full disclosure: the musically challenged me had to Google up most of the terms listed as features to know what it means. It even offers you a platform for sharing your creation with the rest of the world.

All in all, it looks like a pretty nifty, featurefulness service being offered for free. If you are interested in the mixing, looping, scratching ityadi stuff and don’t want to pay [either a bomb or a cracker] to do so, Myna seems to be a good starting point. Do give it a try.

UCAV: How to wage a war from your living room

A beautiful example of seamless integration of multi-disciplinary technology interplay, all working in tandem to accomplish objectives with pinpoint precision and accuracy.

Had it not been for the termination of an actual human life [technically the targets of such UCAVs can lay claims to the title of being addressed to as humans…technically] at the end of missions it undertakes, it would have been the most serious, awesomest, bad-assly, nerdgasmic setup for playing a flight sim.

An interesting thing I learnt [among the gazillions of interesting thing I learn every day] was that the control of the UCAVs up to the take-off stage and then when it is about to land is in the hand of the operators located in the battlefield theater and not the one sitting 1000s of miles away in America, who controls it in flight and also fires the missiles upon receiving orders. Me wonders how much of this is due to limitations in Technology and how much of it is due to something far more non-technology reasons. 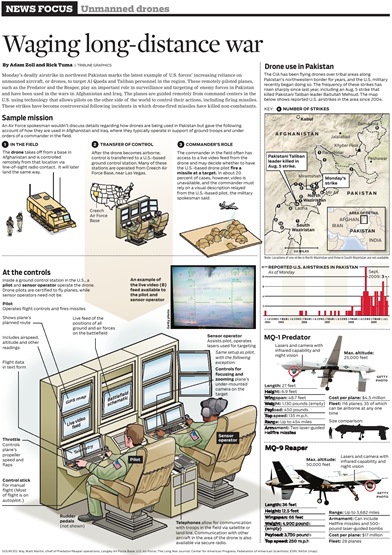 You may view the original file here [PDF 3 MB]

Popular Science had done a fairly detailed feature article on this topic some months back - Point. Click. Kill: Inside The Air Force's Frantic Unmanned Reinvention. It includes a video of a UCAV pilot describing the sequence of operation involving the launch of a Hellfire missile from a Predator UCAV targeting Taliban terrorists.

Though obviously this controller setup is not placed in anybody’s living room [duhh!! me for even thinking anybody would have thought so], recent reports co-relating gaming and UAV/UCAV piloting got me to realise that the genesis of metamorphosis of these people in to men waging war lies in the living room – hence the title :-).

Was sifting & pruning the collection of downloaded videos, when I came across this great video by Professor Richard Buckland. In his usual exuberant, animated & engaging style he gives a brief talk about about three of Alan Turing’s greatest contributions – decoding the Enigma, Turing Machine & Artificial Intelligence [A.I.]. 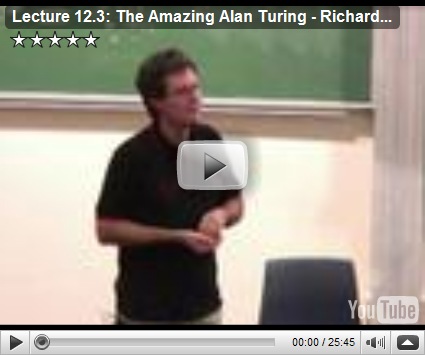 The UK government recently tendered a formal apology to Alan Turing [Not that the UK Govt was demonstrating some new, path-breaking technology that enables direct contact and communication with those living on the other side…but still symbolically at least] for the treatment meted out to him after it was discovered that he was a homosexual [via rowanNS]. Better late than never, I’d say.

This weeks list of interesting readings all happen to come from one blog. These series of articles touch upon pretty much the entire gamut of product/industrial designing including trending technologies, concepts & software solutions to aid the formulation of quicker & better designs, fulfilling requirements.

P.S: The author of these articles, Mr. C. Svenson Johnson had informed me that this series is incomplete and more posts would be added. The awesomeness of these articles merits a re-posts as recommended readings once he completes the series :-). Better still, subscribe to his feed [though he has let his blog remain a lil’ un-updated].