The aircraft's nodal development agency is considering delegating the task of designing a radar nose cone to a third-party. But what of the one that was already in use? 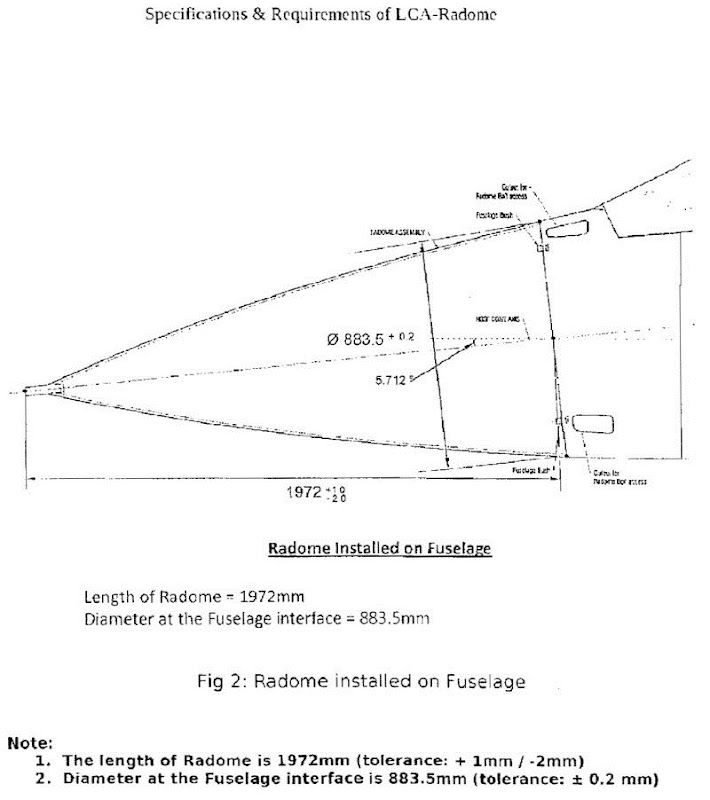 This weekend, while going through a bunch of Government-released publicly available documents, came across the following. It turns out, that the Aeronautical Development Agency [ADA], the parent body overseeing India's Light Combat Aircraft [LCA] Tejas programme, has solicited 'Expression Of Interest' [EOI] for the 'Design, Development and Manufacture of Radome for LCA'. 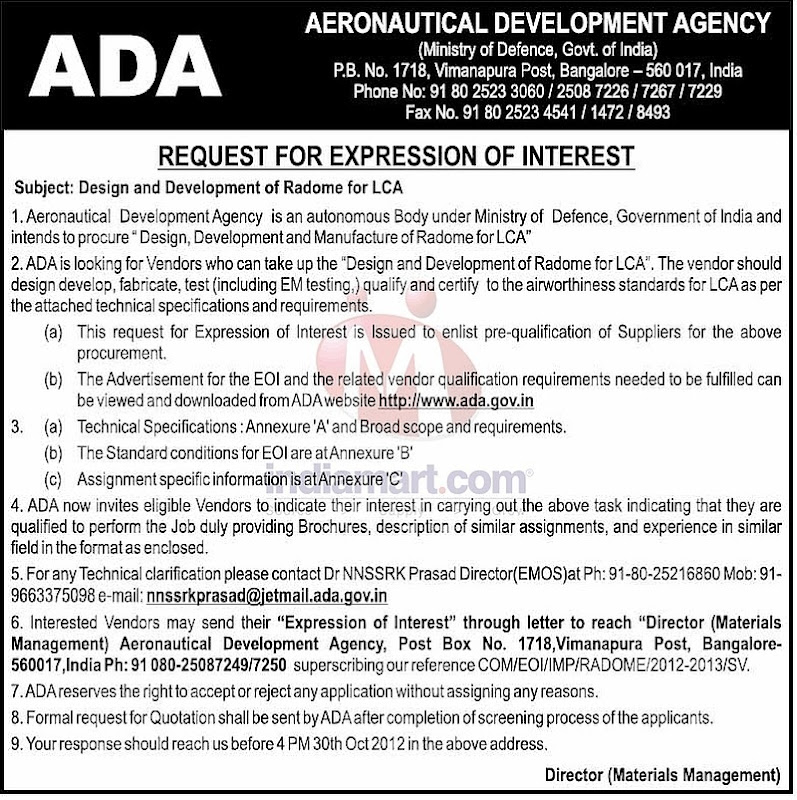 What is important to note here is that ADA is not looking for a consultant to help it design a new Radome, or improve its existing design. Unlike the previous occasion, the nose cone currently used is not of a foreign procurement, that ADA is now trying to indigenise. The aircraft, quite visibly, very much sports a nose, one that the DRDO lab has itself designed & tested. Neither is this an ADA hunt for suitable private company to which it could transfer its own design details, that it could then mass produce for the LCA. Doing either of these would have made great sense, an indication of the smooth flow of development. Clearly, as evident from its announcement, the aim is to secure an all-new Radome design for the Tejas. Its performance characteristics would then be compared with its own design and, then, if the former is found superior, it would be chosen, over its own.

To my mind it indicates a level of dissatisfaction with the outcome of its own design efforts, and a degree of lack of confidence to see it through to the end. Else, despite confidence, lacking sufficient manpower to carry out, simultaneously, efforts towards further development in other areas of the aircraft [for the Mark II] & improvement in the Radome, ADA has decided to hive off work on the latter to an outside agency, so that it could concentrate on the former. Inclined to believe it is the latter predicament facing ADA. One will have to wait for journalists with 'sources' to get a clearer picture. Strange, none of them have taken this up, considering ADA expressed its intent a couple of months back. Not big enough a deal, it is?

After completing its own qualification tests, the winning entity would be expected to provide 6 samples of their design, adhering to industry standards & specifications, for ADA to evaluate and compare. If it passes muster, then the company would have to transfer the technology for the same to "an ADA identified suitable Indian production agency.". Clearly, the call is for designing the Radome, not producing it.

There are a couple of things we can conclude from the document, though. ADA appears to be satisfied with its Aerodynamic characteristics & sees no reason to improve upon it. It has stated that no changes be made in the Geometric specifications of the Radome, though surface finish could be improved upon. Thus outwardly the new Radome, if selected, would look no different from the one currently in use. What they do want, however, is that it display better Electromagnetic [EM] performance - it must block the least possible amount of radiations emitted by the Radar it protects. Of special requirement is its permittivity to X-Band radiation - the frequency at which the LCA's under-development Multi-Mode Radar [MMR] functions.

As part of this call, ADA has made quite a few details available of the Radar and its configuration. For example, the Identification Friend or Foe [IFF] slotted array antenna is physically mounted on the LCA's MMR, though it is a separate, distinct system. The radar has a scan coverage of 140o in the Azimuthal plane [plane of the wing] & 120o in the plane of altitude [plane of the vertical tail fin]. The paint scheme in which the nose cone is painted is referred to as 'dove grey' and has a matt finish [would it not nullify the better surface finish ADA desires, as stated earlier?]. The radar nose has to be designed with a factor of safety of 1.5, w.r.t forces acting on it during flight operations. 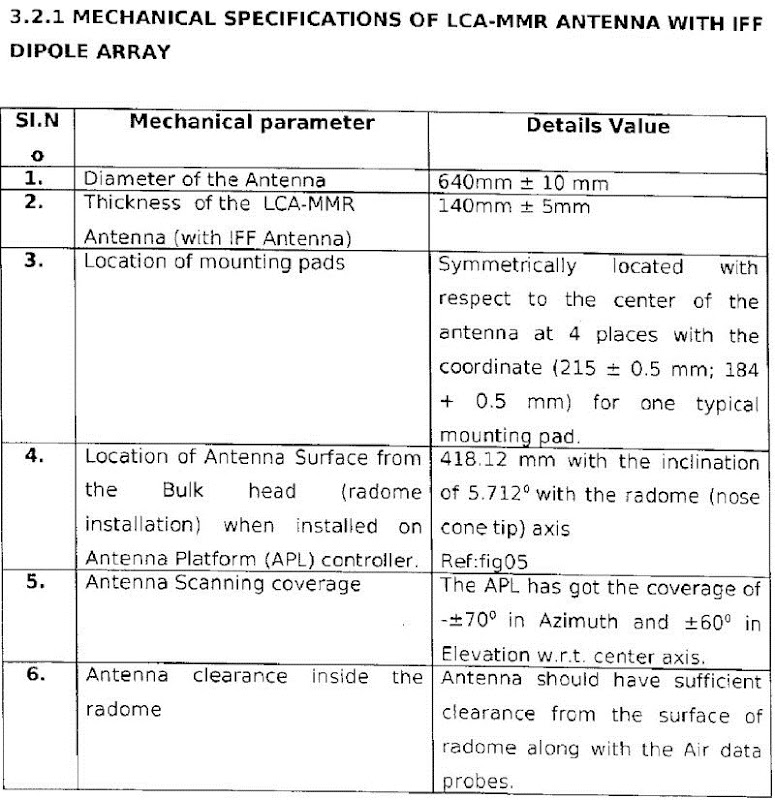 The document also helps arrive at a ballpark figure of the average monthly flying hours of an Indian Air Force [IAF] fighter pilot during peacetime. Its requirement states that the radar cone must last 3000 flying hours or 30 years. Assuming they are interchangeable, an IAF fighter aircraft, therefore, spends close to 8 hours each month in the air.

ADA has asked respondents to furnish details of similar work of designing Radome of other fighter aircrafts that they have carried out earlier. Thus, safe to assume that it would only entertain EOIs from established international Aerospace companies, & justifiable so. As this is a design contract being awarded, offsets have no role to play in this. It would still be highly desirable if Indian companies are involved in the execution of the contract. The first name that comes in the mind is that of Tata Advanced Systems, which has a collaboration with Aerospace giant Lockheed Martin Corporation, to license manufacture aero-structures for the latter. Tata Technologies plays a greater role in executing design-oriented sub-contracts for bigger Aerospace firms, like The Boeing Company, BAE Systems, among others.  Other Indian biggies too have entered into tie-ups with international Aerospace majors, primarily in order to ensure the latter comply with offset requirements in other contracts. Thus, one way of honouring part of the offset could be to involve their Indian partners in the design process. While their Indian partners could take lead in the design phase, testing and compliance with standards could be ensured by the more experienced partner. Therefore, while the onus of ensuring timely execution of the contract will lay at the doors of the primary international firm, Indian companies gain the much needed experience. Such an arrangement could work out to be beneficial for all. JMT.

In absence of greater clarity about the circumstances under which ADA has gone ahead with this, this call evokes mixed feelings. On one hand, it would imply that its own effort, presently facing shortcomings, would not fructify into production. On the bright side, the Tejas would be built with the best possible elements that can be acquired.

Design, Development and Manufacture of Radome for LCA