India's indigenously developed supersonic fighter aircraft to be developed into a stealth platform.

Dr. V.K Saraswat, presently the Scientific Advisor to India's Defence Minister, delivered a keynote address at the recently held Aerospace Forum in Sweden that concluded on the 3rd of June, this year. Titled, 'Vision for India’s Future Aerospace and Defence', he spoke of some of big ticket Aerospace development projects currently underway or are to commence shortly.

"Many of these technologies could also find their way into the Light Combat Aircraft Mk. 3 that is to be more stealthy than the current Mk. 2 version, which is due to fly in the next two years with the General Electric F414 engine and be ready for operational trials in 2016. The Mk. 3 is to have up to 70% composite content, almost double the current version's level, and could be powered by India's Kaveri turbofan, if that troubled program gets back on track." 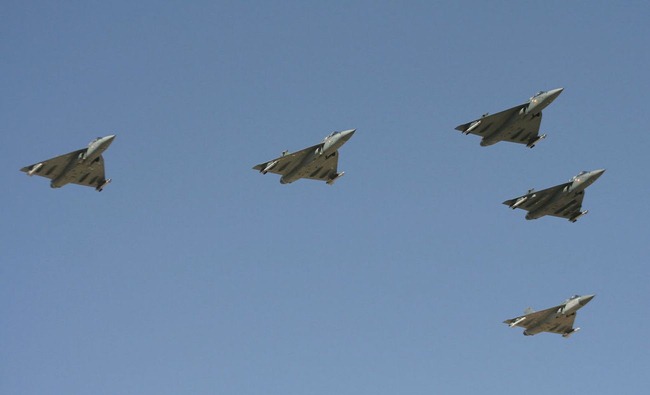 Considering this aircraft was not developed from the outset to be stealthy, the final outcome of this particular venture would, therefore, be more of having improved the aircraft to exhibit greater reduction in its Radar Cross-Section [RCS] than its previous iterations [Mk. I & II]. Having a small-sized airframe [smallest for its class], inherently gives it a fair degree of that advantage even now. Add to it reduced metallic surfaces by replacing it with increased composites, and you should have a fine aircraft whose chances of detection on the radar would be that much closer to those aircraft, bigger in size, that are touted as truly stealth fighters. For an aircraft that is not to be the frontline fighter of the Indian Air Force, this development should be a welcome gain.

The Defence Research & Development Organisation [DRDO], on the back of its present Airborne Early Warning & Control System [AEW&CS] development programme, that now appears to be looking up, is to initiate a program to build a more powerful platform capable of detecting fifth generation stealth aircraft & unmanned flying systems. This project gains significance in light of development of fifth generation fighters in the neighbourhood, that should likely enter service by the end of this decade, along with increasing adoption of unmanned aerial systems by armed forces the world over.

At the same time, the country is exploring ways to better detect stealth aircraft. Detecting low-observable aircraft is a key element of the Indian 2020 airborne early warning and control development effort, a program likely to start in late 2014. It will be based on a yet-to-be selected widebody. This initiative follows the current Embraer EMB-145-based airborne early warning program featuring an Indian-developed, 240-deg field-of-view radar. The first of the modified regional jets is due for delivery to India in August, with radar integration to start in October.

The new system will feature a rotodome radar and be integrated with unmanned aircraft and aerostats to allow bi-static radar operations to detect stealth aircraft, says Vijay Kumar Saraswat, scientific adviser to the director general of the Indian Defense Research and Development Organization (DRDO). The distributed transmitter and receiver approach should also aid in detecting small targets, such as unmanned aircraft, and provide extended-range detection, Saraswat recently told the Aerospace Forum Sweden 2012.

Dr. Saraswat's talk has been summarised in an article that appears in the latest issue of the Aviation Week & Space Technology magazine. You could read the full article below.

Another article that details the talk given by Dr Saraswat, 'Aerospace Forum Sweden 2012: India invests heavily in unmanned technologies'