How to interpret fact in a manner completely opposite to what it actually means - an art perfected by Pakistan.

The media in Pakistan recently went abuzz with a news report which stated that one of the U.S. Navy's Carrier Battle Group, lead by its flagship Aircraft Carrier, the nuclear-powered USS Enterprise, had entered Pakistani waters in the Arabian Sea. This manoeuvre was being attributed as an American display of muscle-flexing in light of Pakistan's intransigence & continued support & patronage by 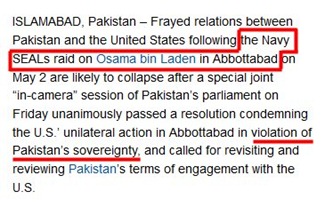 its all-powerful Army & intelligence agency of organisations responsible for the death of American troops in Afghanistan. As is their well-practised SOP in response to such revelations, the Islamic Republic cried hoarse, terming this act as a "violation of Pakistan's sovereignty", similar in nature to the one that lead to the killing of OBL in the garrison town of Abbottabad.

In midst of this hackneyed outpouring of "outrage" that seems to engulf that country every other day, one enterprising entity, calling itself the "Americans For Democracy And Justice in Pakistan" [AFDJP] took it upon itself to "investigate" the matter. Thus, it appears, they contacted the U.S Department of Defense demanding seeking information about the position of an American Carrier Group during its operation deployment. In response they were informed that,

"The Enterprise got no closer than about 150 miles from the coast of Pakistan."

Pakistan's Exclusive Economic Zone [EEZ] extends up to a distance of 200 nautical miles from its coast. Thus, by stating that the carrier was 150 nautical miles from the coasts, the U.S., in essence, acknowledged that the U.S.S. Enterprise did indeed enter territory over which Pakistan exercises sovereign control, apparently, without seeking prior permission or informing the host country, as is the norm, much like the OBL raid.

With this response in hand one should not be faulted for expecting AFDJP to report the same. Unsurprisingly, in a country long known to interpret antonyms as synonyms, this statement was understood by them to state the exact opposite. Thus it went to town boasting of  "debunking a rumour", proclaiming 'USS Enterprise Never Entered Pakistani Waters'. Talk about turning something on its head! Perhaps AFDJP's idea of the Enterprise being in Pakistani waters would require the Carrier to be berthed near the Clifton beach for some R&R.

To be fair to the Americans, they aren't wrong w.r.t to the Enterprise report when they say, "I can confirm for you that those reports in Pakistani media are indeed false". That's because the U.S. does not recognise Pakistan's claim over its EEZ, & has been reminding them so at regular intervals,

"Prior permission requirement for foreign warships to conduct military exercises and manoeuvres in the EEZ. Freedom of navi-gation and overflight recognized but foreign state aircraft must file flight plans with civil aviation authority.

Could the latest deployment, in addition to what was being alluded to earlier, be yet another act of reminder?

Related: WTF was this Pakistani thinking?!!!