Having lost America as its patron following the Iranian Revolution along with imposition of sanctions by the West for the same, Iran had not much choice, but to turn to U.S's Cold War adversary, the Soviet Union to meet its military requirements. That too wasn't as straightforward since the Soviets enjoyed friendly 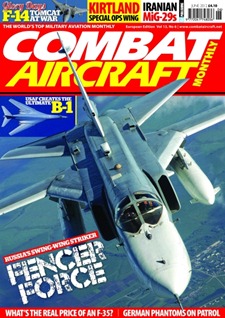 relations with yet another of Iran's adversary, Iraq with whom it was locked in what is popularly known as the '8-year war'. Nevertheless a deal between the two went through & the MiG-29 combat aircraft came about to become the tip of the spear of the Islamic Republic of Iran Air Force [IRIAF], a role earlier bestowed upon the American F-14 Tomcats.

The June edition of the Combat Aircraft magazine has an article about them. Titled, "Guardians of Tehran - Iranian Fulcrum", it details some significant aspects of the Fulcrum's operational history & service [or lack of it] with the IRIAF. As is to be expected with any nation under international sanctions, access to spares required to keep the birds flying appears to be critically lacking, forcing it to scavenge its own aircrafts to keep others up in the air. While the Iranians have shown to perform a number of in-house upgrade programmes, with assistance provided by countries that formed part of the former U.S.S.R, the lack of involvement of its O.E.M, in most parts, in this venture could likely mean that these programmes have been less than optimal in their efficacy. Taking all into consideration, it would be safe to assume that time spent in the air by these fighters is also likely to be much less than what they'd have desired.

As regards the theoretical number of MiG-29 fighters the Iranians may actually posses, there appears to be a dichotomy between what appears on Wikipedia [90] & the number I could count from the article.

$ - source. As mentioned in the article, Russia refused to honour its contract of 48 aircrafts with Iran any further upon being pressurised by the U.S

Any data proving a higher number of MiG-29 airframes in possession with Iran would be much welcome.

On a tangential note, a statement from the article could also point towards the possible disconnect between grasp of modern technological knowledge & theological adherence of their persuasion. As could be expected, recruits into Iran's Revolutionary Guards were picked as much for their military aptitude as for their theological competency. Of the 12 such pilots who were sent to U.S.S.R for training to fly the Fulcrum, only 3 were found to be competent to fly. This, when Indian pilots who were similarly trained there took a somewhat dim view of the thoroughness of training imparted, all of whom passed with flying colours at hands of  their Soviet evaluators.

"And what they faced was a shock to them. Russian instructors lacked the experience their pupils had and most of the pilots felt that they were below average. The Russians rated all the seven pilots as excellent. And the Indians were not surprised a little bit.

The pilots stayed back in Russia for five months doing their training, which included classroom instruction on the aircraft engines and systems. Flying training was scarce. Air Marshal Wollen recalls, that the average training received during the five-month period was a shatteringly low 4½ hours."

Note, no such issues were reported to have been faced by the pilots from the Iranian Air Force, recruited during the Shah of Iran's rule, who were also similarly trained by the Soviets to fly the same bird.

Perhaps reading too much into a statement made, likely, in passing [to make up required word count] & not much truth to it, or maybe the Iranians were held to higher standards of evaluation than were the IAF pilots.