Islamic Republic of pakistan engaged in deploying a weapon for a scale of battle India has no intention of obliging it with, but one with the potential to imperil the West. 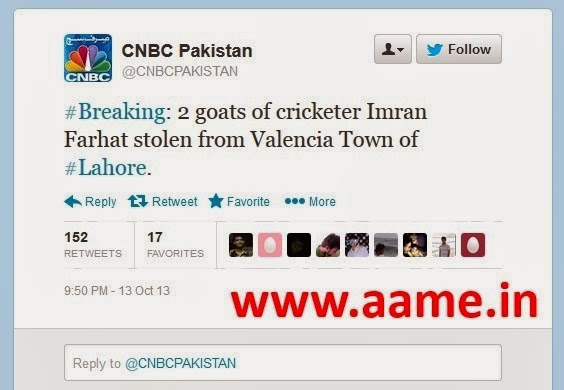 The IISS recently released its annual Strategic Survey for 2013. Receiving some attention is pakistan's military posturing, vis-à-vis India. Concerns primarily centre around its plans to introduce Tactical Nuclear Weapons, commanded by officers on the ground, low on seniority. Envisaged during the Cold War, this NATO concept lost favour with realisation of its futility as a deterrent1 & self-inflicted damage Europe would suffer2. The report states, "parts of pakistan's densely populated agricultural heartland could become a nuclear wasteland" [Also]. Disregarding Cold War lessons, pakistan spirals down the same trajectory, with its conjuring up of the Hatf-IX missile, aka NASR.

To gain better understanding, the ISSSP undertook a study of the Nasr, whose findings it published a few months back. Having taken a 360o view, it gains added significance in light of IISS' concerns.

As noted, pakistan's attempt to set the Rules of Engagement by calibrating its Nuclear pre-emption, using low-yield NASR, would be lost on India, both as Strategy & Science. Enunciated in its Nuclear Doctrine, avowing solely retaliatory measures, Indian response would be massive & disproportionate, existential3. Questionable also is the efficacy of thwarting any punitive Indian campaign, undertaken in response to a pakistani terrorist attack, using the Nasr. Citing pakistani work, they've shown the NASR to be of limited detriment to Indian formations4. Effective operation in a NBC environment has been a persistent focus of Indian planners, who'd envisaged pakistan going Nuclear on advancing Indian Armoured columns, using air-dropped bombs, as far back as the mid-80s. Thus, what pakistan announced recently, India had gamed almost 3 decades back.

Additionally, their report assumes that NASR's Plutonium warhead is of an untested indigenous design. Given the history of illegal China-pakistan Nuclear proliferation, arguments can be made regarding pakistan of being in receipt of tested designs. Backing this, is the ramp-up of its Plutonium production capability, by 300%, suggesting a level of confidence, that could come with testing.

While NASR would have influence, less than what pakistan hoped for, in India's calculus, its endangerment of the West is hard to ignore. Radicalisation among the rank & file of their military/citizenry increases probability of the missile getting pre-delegated to such personnel5. Under these circumstances, its foreseeable for an Islamist outfit to gain custody of it. Utilising the expertise of volunteers, adapt it to be used, at the very least as a Dirty Bomb against a traditional high-value target - the West, or its interests.

In final analysis, it can be said that while the Nasr is just another weapon pakistan can field against India, is the first nuclear device that Islamic terrorists have a high possibility of laying their hands on for use against the West.

"but if the Warsaw Pact responded with a Nuclear attack on a similar [or greater] scale, neither side would gain a significant military advantage as a direct consequence of using such nuclear weapons. Moreover, if the Warsaw Pact were able to resume its attack, given the advantages of numerically superior reinforcements & geographically shorter reinforcement routes, the advantage might well tilt further in favor of the East

the studies did suggest that the large-scale use of nuclear weapons against a massive Warsaw Pact attack in Europe was unlikely to produce a decisive military victory [and would also result in totally unacceptable levels of collateral damage, much of it on NATO territory]. This conclusion naturally did not find favor with a segment of Alliance opinion which wished to see greater stress put in military utility of TNW [Tactical Nuclear Weapons] arguing that preparedness for wide-scale use would have maximum deterrent effect. But it was difficult to contest the conclusions of the Phase I studies" 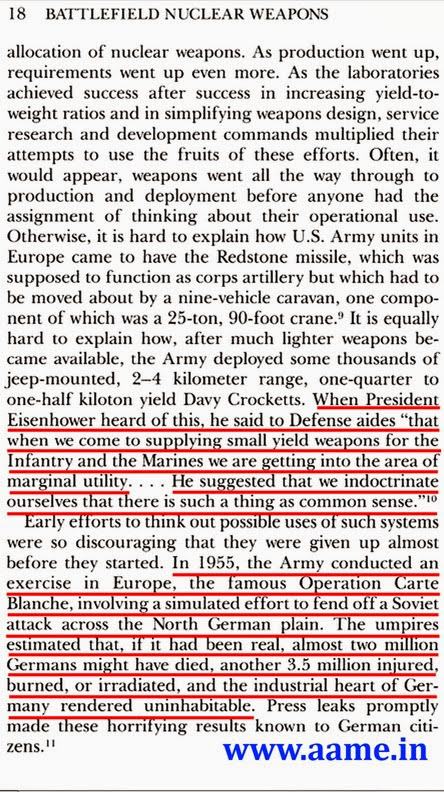 2 = This predicament was cogently expressed by the Defence Advisor to Germany's then Chancellor, Helmut Kohl, Volker Ruehe, who observed, "the shorter the range, the deader the Germans.". This template of argument is equally applicable to pakistan, even more so, given its small geographical extent.

Asked how India would respond if attacked with a nuclear weapon, he assured a packed news conference that "the perpetrator of that particular outrage shall be punished so severely that their continuation thereafter in any form of fray will be doubtful."

- A Blunt-Speaking General Says India Is Ready for War

"Tactical or strategic, it [NASR] is a nuclear weapon. So, obviously our response would be absolutely violent as per our existing policy. I don't think it is a game-changer"

4 = A similar exercise undertaken by a well-regarded & influential American think-tank arrive at a much higher figure [page 133], with regards to the number of nuclear warheads needed to counteract a conventional Indian response, even beyond pakistan's present estimated arsenal strength, a figure, given its present rate of addition & state of economy, it isn't going to reach in a very long time.

5 = Despite numerous pakistani voices repeatedly pleading the case of the safety of pakistan's nuclear arsenal, one can not but be compelled to repeat what senior Indian Diplomat Shyam Saran had pointedly asked, "Would it be possible to island an efficiently managed and sophisticated nuclear arsenal amidst an increasingly dysfunctional polity?"

"The arrest of Brig, Gen. Khan indicates, amongst other things, that HT has supporters even at the highest levels within the Pak army."

- The arrest of Brig. Gen. Ali Khan and the influence of Hizb-ut-Tahrir in Pakistan ~ Dr. Simon Ross Valentine

"[Hassan Abbas] pointed out an alarming trend that included Pakistani pilots refusing to bomb militant strongholds, and units surrendering to militant groups rather than fire on them. In a Wikileaks cable a Pakistani Air Vice-Marshal acknowledged in 2006 that extremism was rampant in the lower ranking officers of the country's air force and they were even sabotaging F-16s deployed for security operations along the Afghan border."

Hizb ut-Tahrir works by recruiting within the institutions of the state -- the army, bureaucracy, politicians -- to eventually overthrow it from within"

"It was shown several months ago that the Pakistan navy is vulnerable to Islamists when a marine commando unit official was arrested," the security official said. "He was a member of the Mehsud tribe from South Waziristan [tribal area] and was completely indoctrinated by militants......Now, they [intelligence] realize how the organization [navy] is riddled and vulnerable to the influence of militant organizations"

"The army chief-cum-president, who has enraged Islamists by working closely with the United States to crack down on Islamic militants, narrowly survived two assassination attempts on December 14 and Christmas Day as his motorcade travelled near his official army residence in Rawalpindi, next to Islamabad."

"Pakistani military is set to launch the court-martial of a colonel and two ex-armed forces personnel on charges of spying, including leaking secrets of the Shamsi Air Force base to those planning to attack it, and inciting fellow soldiers to commit acts of terrorism"

- Pak Col among 3 to face court-martial for spying