After long last, I finally went ahead and carried out a new Desktop PC build for myself. The last time I assembled a Rig from scratch was way back in 2010, while still in college. The reason for this long time gap between the two builds were manifold. For one, the computer assembled then, was quite up to the task of handling my activities all these years, that primarily included Video editing [1080p], and the casual gaming, on Windows 7. Secondly, while the base configuration of the PC was more than 9 years old, I had been making small, incremental upgrades, adding newer hardware [more on that later], over time. 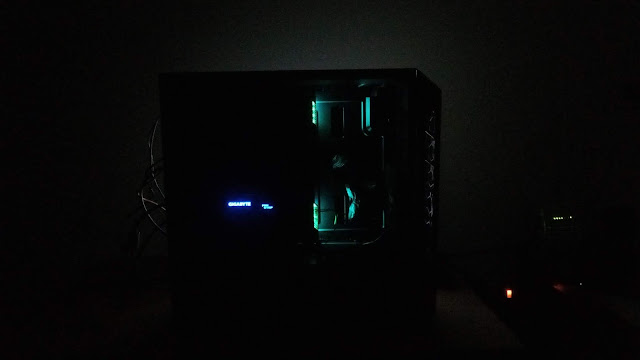 Most importantly, though, the nature of my profession allows me to spend no more than 4 weeks in a year at home. The rest of the time, I find myself soaking up all the experiences offered, while working in some of the remotest places on Earth – have witnessed attempted military coup d'etat, outbreak of Ebola in adjacent provinces, week-long water & power cuts, prolonged local & nation-wide strikes, not to speak of the numerous bouts of Malaria & Typhoid that nature routinely throws at me, all the while going about Engineering pursuits – enjoy every moment of it. Returning home 14-18 months later, the computing offered by my trusty, much travelled, nearly 6 years old Asus laptop, more than suffices for my ~20 days of stay at home – Internet-ing, binge-watching, emailing, ityadi. 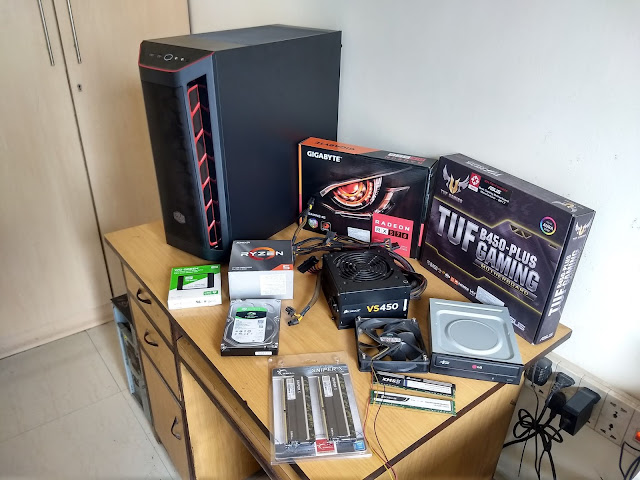 That said, 4K videos are something neither PCs could handle, while my 2+ year old Motorola Moto G5 Plus hits them out of the ground with aplomb. Also, thanks to the free upgrade Microsoft pushed, neither the Desktop nor the Laptop was performing smoothly, running Windows 10. Everything considered, along with an urge to indulge myself with something more than what I practically require, & a need to demo my DIY credo, I went about selecting the hardware for my Build, that should last me at least for the next 4 years, without requiring an upgrade of the core components. A mid-range desktop Gaming PC setup was what I had in mind.
After some research, and online forum consultation, setting myself a budget of around ₹70,000 INR [$983.97 USD], I eventually zeroed in on the following purchase: 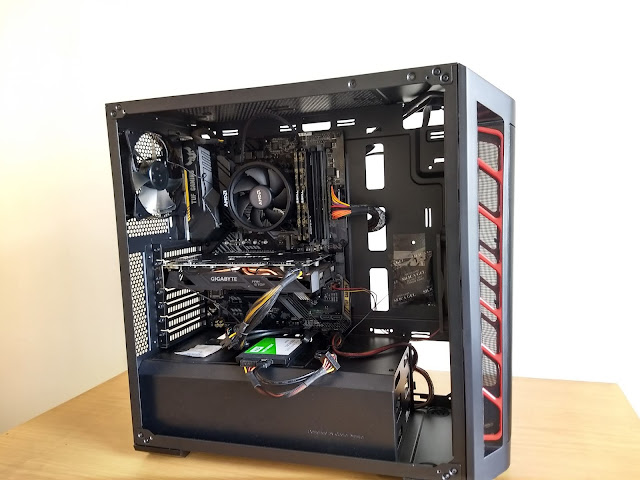 My PC builds have consistently been based on AMD processors – a choice [VFM second to none] that hasn’t changed since 2004, when I took a pretty giant leap of faith, going completely against the overwhelming trend prevailing in India, and chose to assemble an AMD Athlon XP processor-based build, what with it’s core exposed.  This illogical bias, in India, towards the Intel processor continues to this day, albeit to a slightly lesser extent. Now, with the recent release of the 3rd generation Ryzen, AMD processor continues to be the heart of my computer. 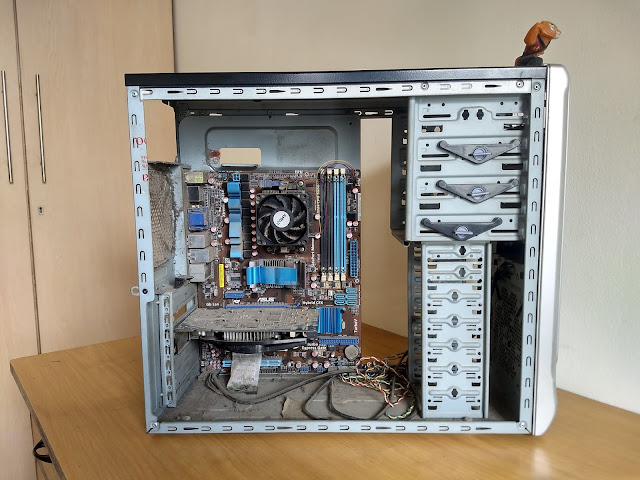 One thing that you may have noticed is that, this purchase is lacking a couple of core hardware needed for a build. As explained earlier, I had been making some incremental hardware upgrades to my earlier computer. So, it was simply a matter of scavenging the older PC to take out what was compatible, and use it in the new computer. Not only did it help keep cost within budget, it also gave me the latitude to spend more on the hardware I actually purchased.
The following hardware, I have installed removing them from the earlier build.

Decided to remove the Optical Drive, too, from the older PC  - LG GH22NP20 DVD writer [SATA] - and keep it safely, for possible use in the future, just in case, you know…'Back To The Future'. Also removed the 120 mm fan that was supplied with the previous Cooler Master Elite 330 cabinet & fixed it on to the front panel of this one. I am planning on adding additional RGB fans during my next R&R. 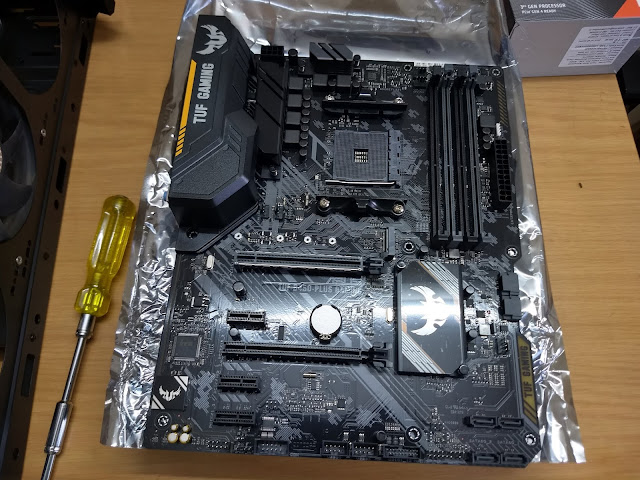 It immediately became clear when placing the orders that, if one wants to get the best bang for the buck then, traditional, online-only store aggregator websites like Amazon & Flipkart are to be avoided. I ordered mine from Prime ABGB, an online store, having many decades of physical presence in Mumbai. The price it listed were, on an average, 20 percent less than Amazon. The ASUS TUF B450-PLUS GAMING Motherboard, for example, that is being sold on Amazon for ₹12,500 INR, PrimeABGB retails it ₹9,800 INR. The RAM, you can get at a 136 percent lower cost on PrimeABGB, than on Amazon. 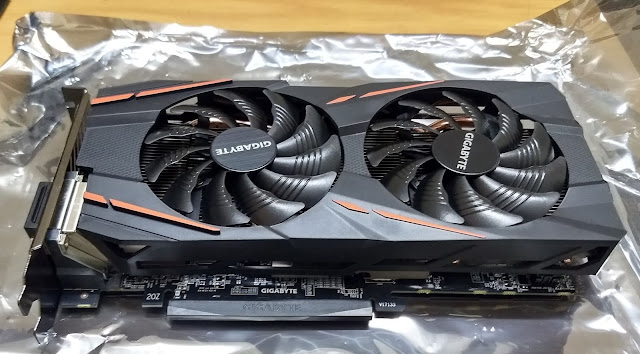 A curious exception to this, however, was the GPU - Amazon listed the lowest price for the 4 GB variant of Gigabyte's Radeon RX570 Graphics Card, compared to the others.
Though B450 Chipset-based Motherboards weren’t originally 3rd generation Ryzen processor-compatible, they can be made so with a BIOS update. The good people at Prime ABGB readily agreed to do so, before shipping, making my job that much easier. 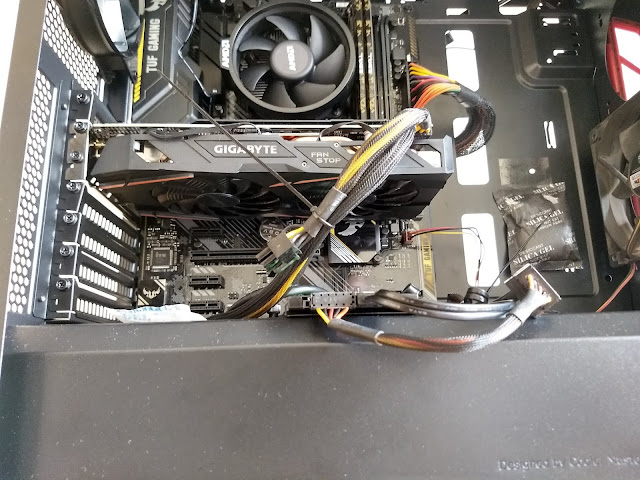 If you are considering your build atop a B450 chipset-based Motherboard, you may also consider MSI's Tomahawk Motherboard, that they are now shipping out 3rd gen Ryzen compatible, right out of the factory. Wasn’t available when I was choosing the hardware earlier this month. The Tomahawk B450 is currently being retailed on Amazon for ₹11,999 INR [$168.67 USD], while PrimeABGB has listed it at ₹10,063 INR, though it isn't still available there, as of today, despite claiming availability on their website. 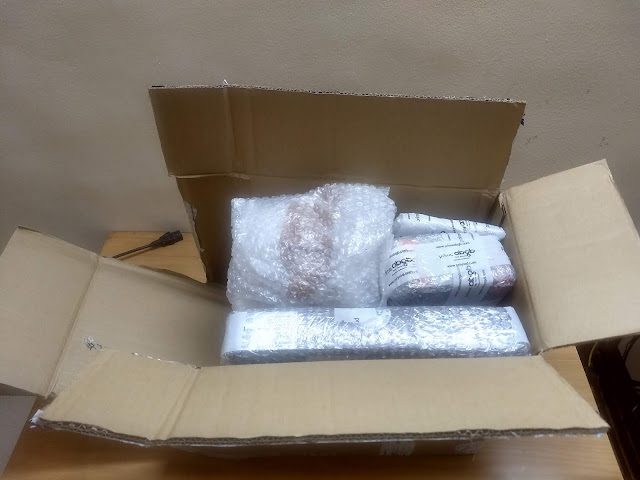 Prime ABGB's shipping package that arrived, too, was sufficiently well-wrapped & padded to protect the delicate content inside.

Speaking of availability, it is prudent to call them up and confirm availability of the listed product, before actually placing the order. Upon doing so myself, I was told that the ADATA XPG SPECTRIX AX4U320038G16-DR41 RAM, I had initially zeroed in on, wasn’t available, despite their website stating availability. Also unavailable was the Antec P7 Window Mid Tower ATX Windowed Side Panel Cabinet Red, I originally wanted. 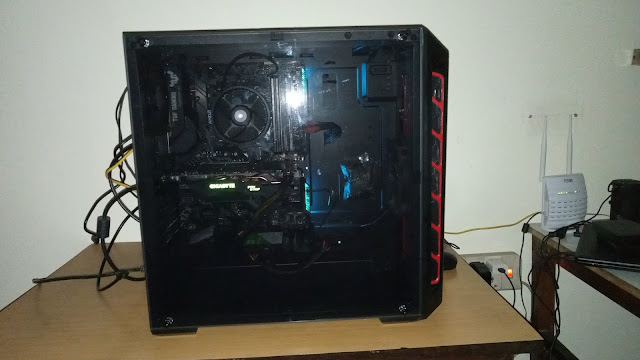 MD Computers & Vedant Computers are some other such physical stores in India, with an online presence & reliable home delivery, when ordered from the website. They have been favourably reviewed by other Indian Netizens assembling custom build PCs. 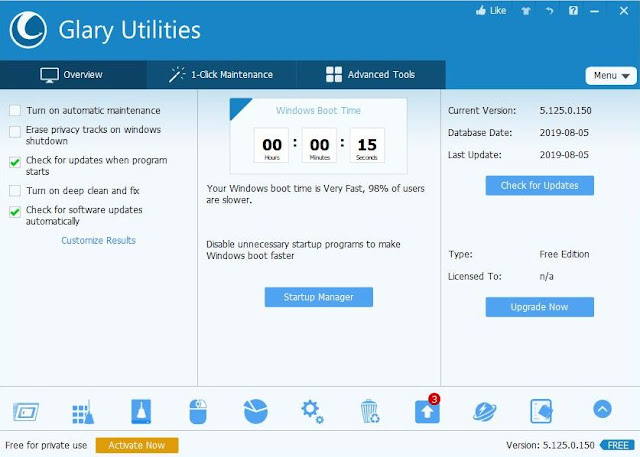 Thanks to the SSD, and a bit of tweaking with the help of Glary Utilities Free and Auslogics BoostSpeed 11 Free, disabling unwanted Services, the computer has been registering some blisteringly fast Boot time, without even enabling the 'Turn on fast startup' option. Multi-tasking performance, that includes running encoding sessions on DaVinci Resolve 16, with Audacity, VLC Player, too has been spiffy. 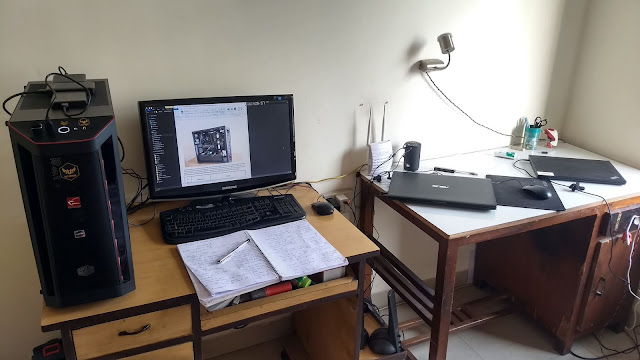 Wanted to RGB-fy this build, starting with the core hardware themselves, but the non-availability of the ADATA RAM sticks, has paid put to those plans. Will do so using third-party RGB solutions. Still have to buy a Game Pad & another Monitor [a dual-monitor setup], that I will do during my next visit home - R&R already over. Will be reporting back on Monday. The Keyboard &  Mouse, I plan to use for another year, while the PSU I will replace before I OC the PC. For now, I am back to exploring my new indulgence.
To gain familiarity assembling the AM4-socket based third-generation AMD Ryzen processor, I found watching the video quite a useful pre-requisite. You would need to careful about the exposed Thermal Paste that AMD has already applied on the Processor's stock Wraith Spire fan. Thinking it was a peel-off sticker, like the one supplied with the Athlon II X4 620 processor, I slightly touched that surface of the fan, only to lightly disturb the paste application, making a thumb impression on it. Fortunately, I had touched it lightly at the corner, so no harm was done. 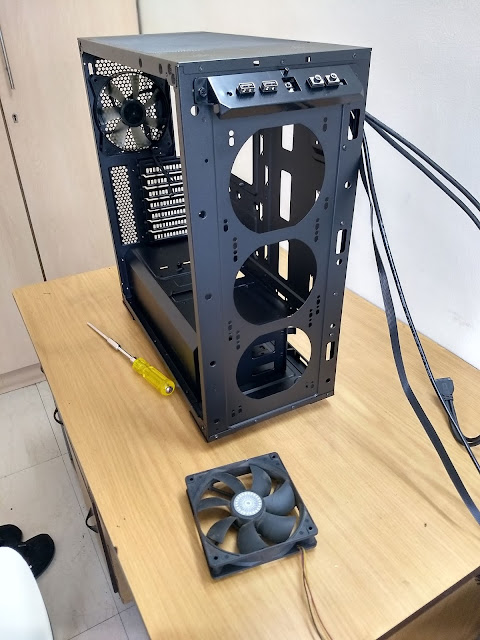 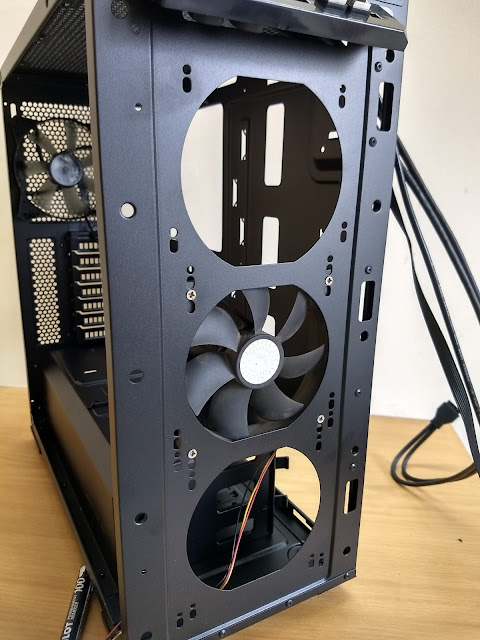 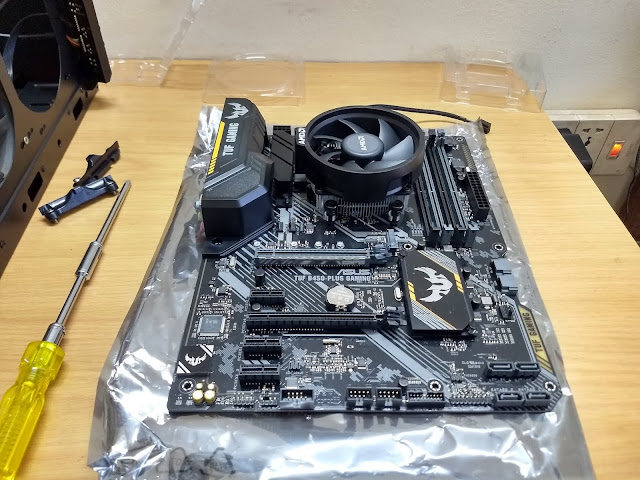 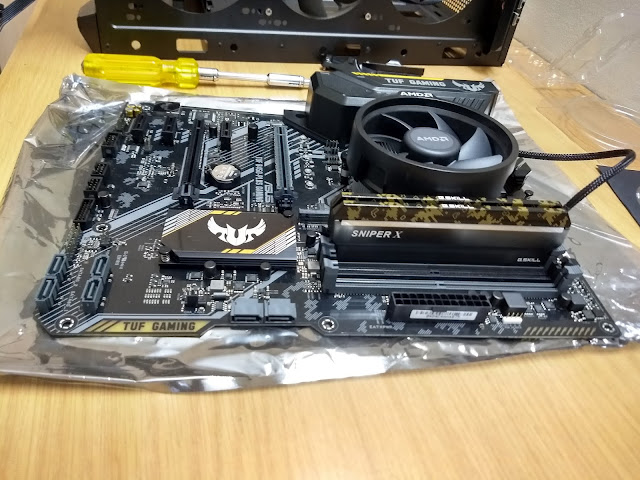 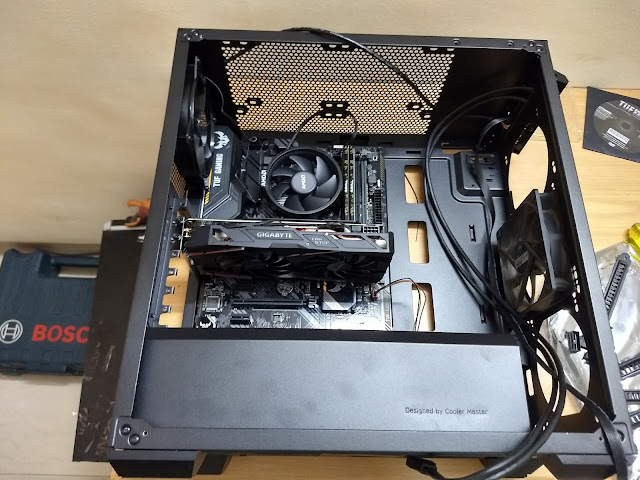 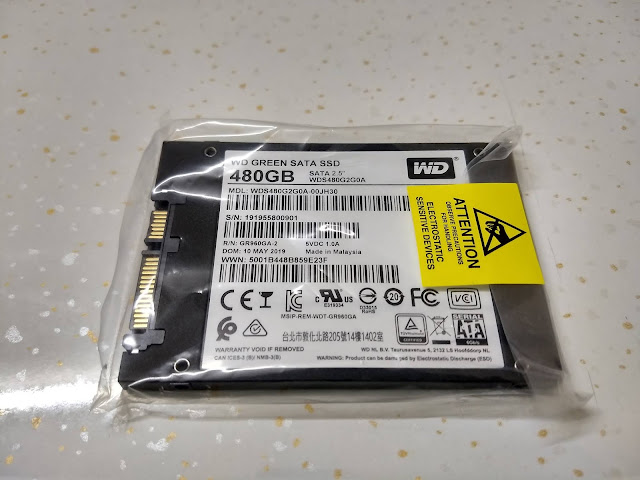 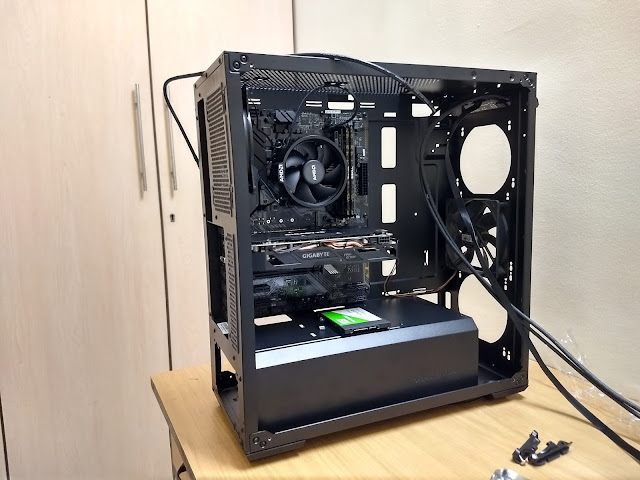 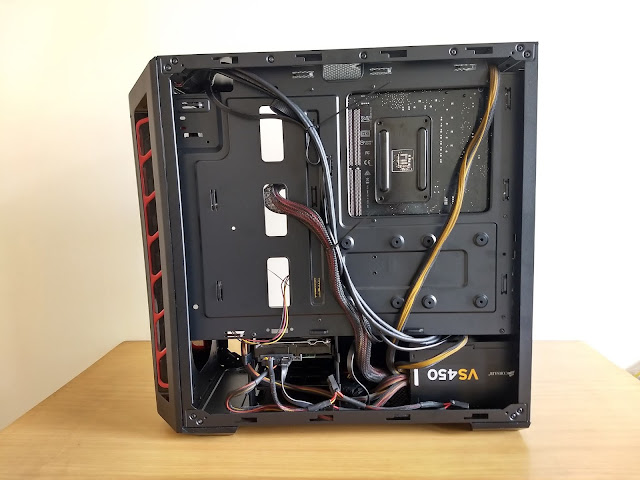 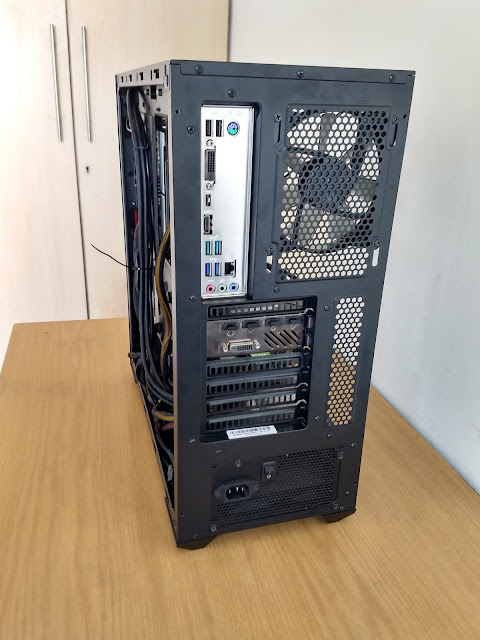 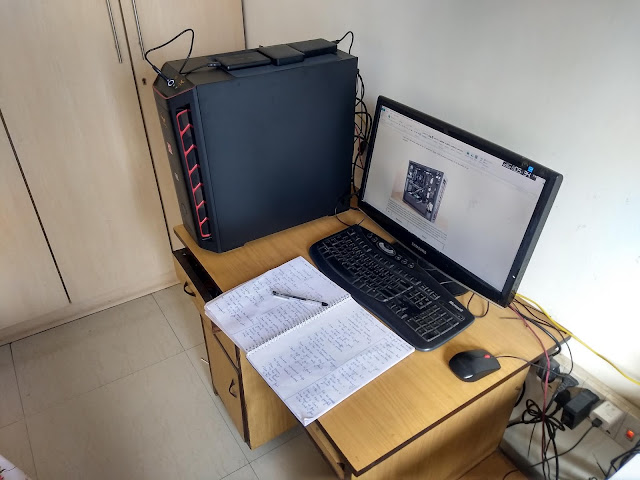