Dissapointing service by two of the biggest names, in their respective fields, in India.

The ability to avail of various services online, within the comfort of your house, time notwithstanding, is a heaven-sent convenience in the present day of hustle & bustle. One such service that I put to good use is topping-up my cellphone’s Talk-time balance. With a State Bank of India [SBI] savings account at hand, the task has been, thankfully, uneventful, so far.

However, events of yesterday evening leaves me reconsidering my views. My Mother uses an Idea cellular SIM with her phone, that required a recharge. Wanting to avail of its 84-day validity offer of Rs. 459, that allows you up to 1.4 GB of daily Internet data usage, with unlimited Calls & 100 SMS, I decided top it up with Rs. 510. 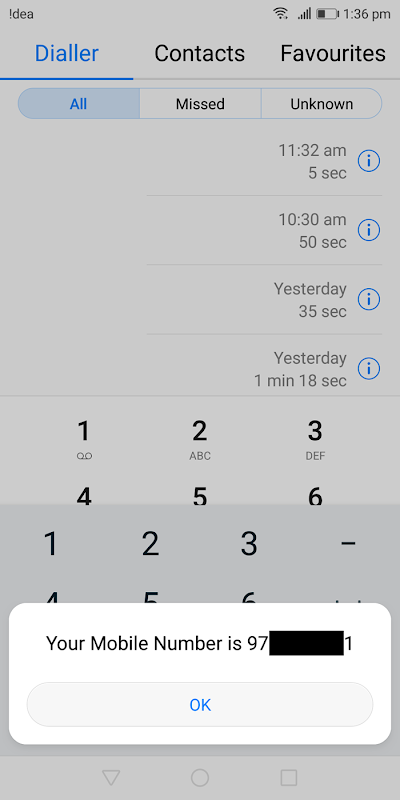 Accordingly, my account statement showed a deduction of Rs. 510, but there was no corresponding recharge of the phone’s balance. I, then, realised I had accidentally selected the wrong Service provider, while initiating transaction - my bad. Thankfully I, then, received an SMS from SBI saying,

‘Payment of Rs. 510 if debited would be reversed soon. TID :UHXXXXXXXX’.

An amount of Rs. 510/= INR was, subsequently, credited back, though corresponding to which of the 3 transactions, is not definitively known.

Second time around, I made no mistake. Selected all the right options. Another Rs. 510/= got debited, but the Mom’s number still did not get recharged. Interestingly, this time, though, I got another SMS saying the number had been recharged! WTF! [below] 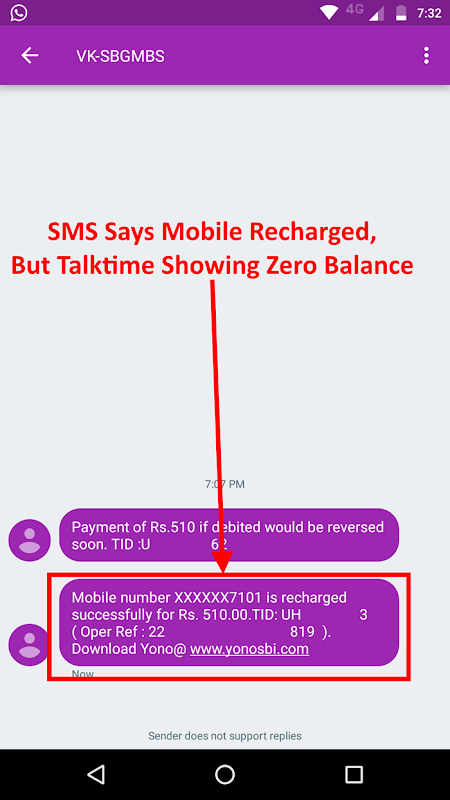 Being urgent in nature, I tried again, one last time, hoping for a better outcome. Reminiscent of the quote, "doing the same thing over and over again and expecting different results". Yet again, SBI debited Rs. 510 from my account & credited nothing into Mom’s talktime balance. As of 01:31 PM on April 13, 2018, when I started writing this post, there was no top-up balance in Mom’s phone. 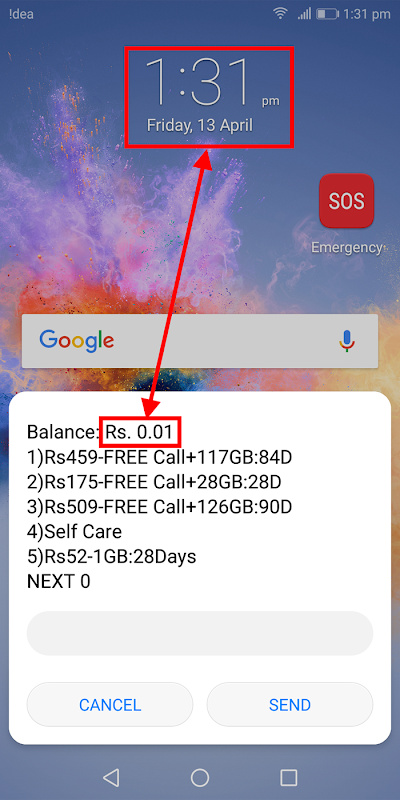 When I brought issue to SBI’s & Idea’s attention, over Twitter, the former, as Sarkari, as Sarkari can get asked me to fill up a form [more on that later] & Idea began peddling its App. Have no interest in installing multiple apps, that perform the same function - already have the ‘SBI Anywhere Personal’ on my handset. 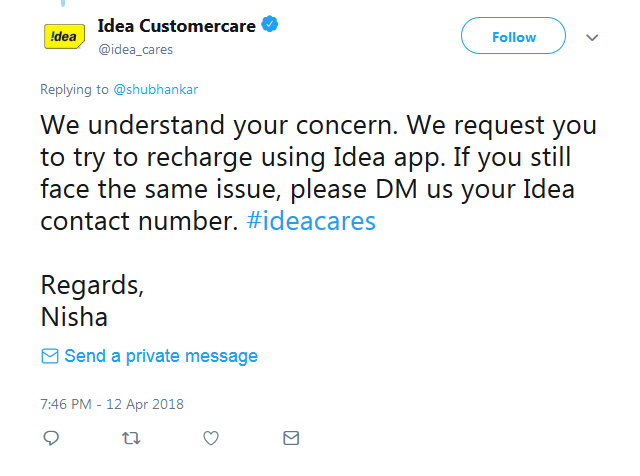 Coming to SBI’s response over Twitter, it directed me to an online form, to be filled up. There, amongst the informations, it asks for 'Txn Id/UTR No.', a detail that wasn’t made available during the transaction. Hence, the form too turned out to be useless. 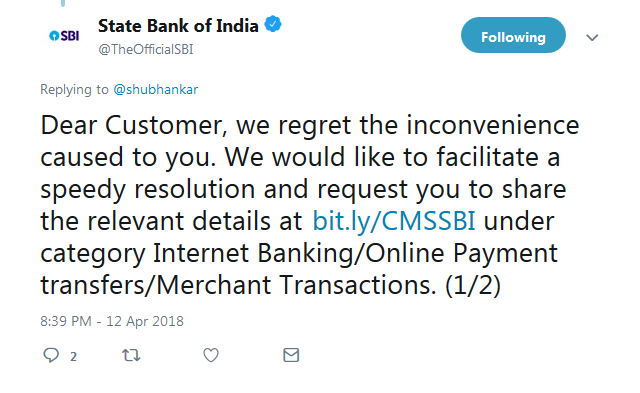 Bad, bad services you, both SBI & Idea. I, now, have to figure out how to get back the balance money, but more importantly, recharge Mom’s phone - perhaps a visit to the neighbourhood Grocery Store, to buy a Recharge Card, will serve the purpose. Haven’t done so in a decade.

Starting this post, I’m thinking of using this Blog to post "stuff" that I feel like, sort of like a personal kind – general, non-technical kind. The name of this this blog, after all, is AAME, meaning, me, in Bengali &, when phonetically pronounced, means friend, in French - also an acronym, of sorts, All About ME.

For posts related to India-specific STEM content, with a focus on Nuclear, Space & Military technology, check out my other blog - www.spansen.com. It takes up from the initial letters of SPace, ANu [Nuclear] & SENa [Military]. 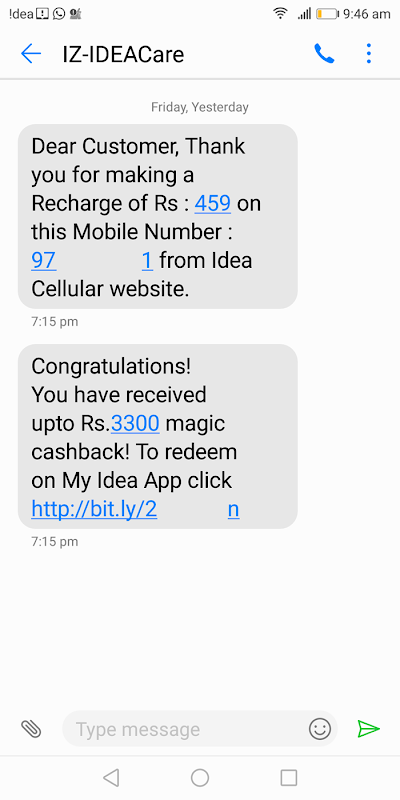 Received back another unrecharged debit of Rs. 510 yesterday. Found out just now. Comparing the Reference Numbers, managed to map against which debit, it has been credited back. One unrecharged dbit still remains to be reimbursed back. Screenshot below.

Have got all the unrecharged Top-up money credited back to my SBI account. The last of the reimbursement happened the day before yesterday, on Wednesday, it appears. Satisfied. 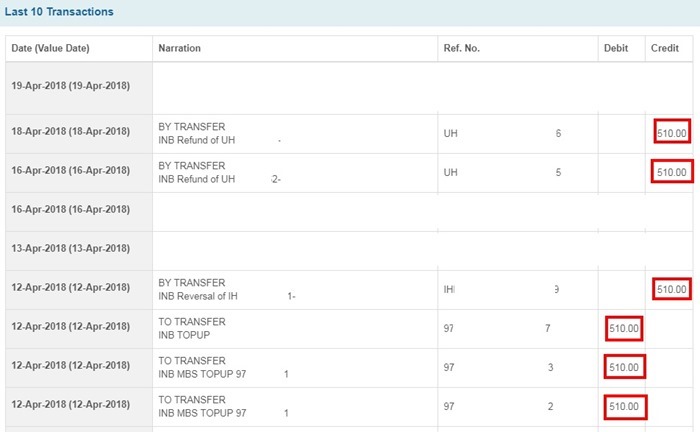