Ok, you are not that much into these things to warrant a purchase of Janes, yet your interest can be described as much more than passing. You require as a ready reckoner. a comprehensive list that tabulates the numerical strengths of Air Forces of the world & the different varieties of flying assets in their possession - aircrafts & helicopters. Flight magazine has come out with just this kind of a report relevant to the year 2011-2012.

To get a sense of how big the combined strength of America’s air asset is, one in four military aircraft in the world is American,

"As before, the USA tops our league tables in every directory category for the number of aircraft in active use, with its air force, army, Marine Corps and navy together accounting for 25% of the total equipment listed this year."

As for how small, in comparison, the rest of the Air forces are, is stated right afterwards,

"Russia is a distant second, followed by China, Japan and India, although these four nations combined account for only three-quarters of Washington’s total assets."

One major omission, however, in the list, in my opinion, is the exclusion of Unmanned Aerial Vehicles [UAV] or Unmanned Combat Aerial Vehicles [UCAV] from the inventory count. More & more countries are making increasing use of these new-age systems. Would have been interesting to learn about the trends of their use across Air Forces. Nevertheless, a handy reference to have by the side. 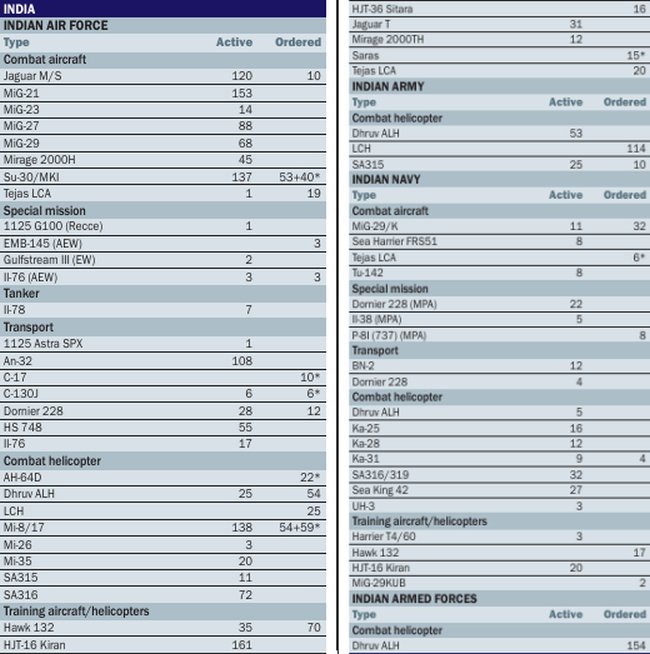 Surprisingly, it shows 1 indigenously developed Light Combat Aircraft [LCA] Tejas active. Don’t quite know how the number was arrived at, because according to the data available on the official website of the Aeronautical Development Agency [ADA], at least the LSP-2, LSP-4 & LSP-5 have been regularly performing test-flights in the past few months.