In a plenary sessions at the International Astronautical Congress organized by the International Astronautical Federation held a few months back in South Korea, representatives of various Space agencies talked about their planned human missions to the Moon. Speakers in this session included representatives from Canada’s CSA, European Union’s ESA, India’s ISRO, Japan’s JAXA, South Korea’s KARI, USA’s NASA & Russia’s Federal Space Agency [Roscosmos]. During their talk, each one of them spoke about their proposed human missions to the Moon [either collaborative or stand-alone] including their work towards developing enabling technologies to achieve this that would include sending unmanned mission to the lunar surface as a precursor to the eventual targeted manned mission to the Moon. 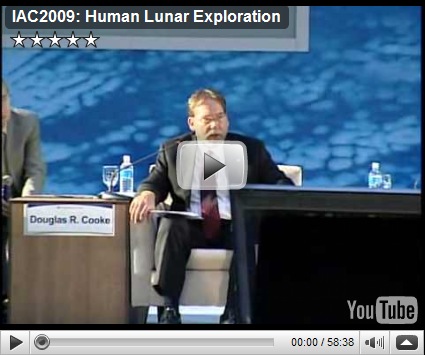 Of special interest was the talk give by ISRO’s Dr. V Adimurthy. In his talk he touched upon India’s eventual manned mission to the moon as also the much-nearer-in-the-future maiden manned space flight through the Low Earth Orbit scheduled for 2015 & the Chandrayaan-II mission scheduled for 2013. Not restricting itself just to the the Moon, he also touched upon India’s planned missions much further into the Space, including mineralogical exploration & targeting Comets headed towards Earth. Not surprisingly most of the participants in this plenary session referred to the successful, albeit slightly premature, completion of the Chandrayaan-I mission & successful completion of their own experiments as part of the payload onboard the Chandrayaan-I mission.

Posting some of the interesting screenshots from Dr. Adimurthy’s talk.

In another session at IAC 2009, South Korea's first Astronaut, Yi So-Yeon gave an anecdotal account of her experience in Space including her selection process from among 36000 other South Koreans. Made for quite an interesting viewing.

What it is like being an Astronaut [Duration: 43 minutes]