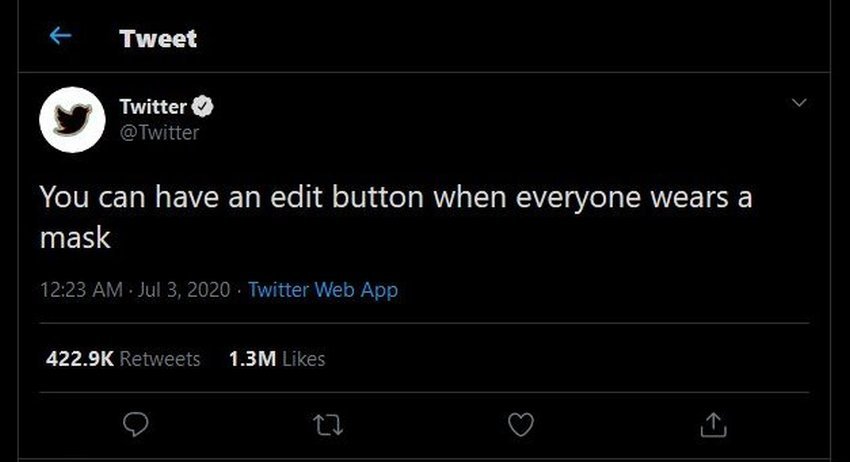 Early this morning, Twitter posted the above tweet. It was in response to the long-standing user demand to allow Tweet Edits. The condition it stipulated means Twitter would introduce it, never. If Twitter were to implement it intelligently, 'Editable Tweets' could actually help elevate the level of discourse.
As it often happens, "someone" will tweet something, that is either false or a reflection of the handle's prejudices/bigotry. That someone being "high up",  it's Bio-bots start RTing it, on queue. The Tweet gathers Critical Mass, coming to the wider attention of it's intended target. Outrage ensues. Mission Accomplished, handle promptly deletes original. Bitter aftertaste lingers. Shoot-and-Scoot.
A MIT Study has analysed the practise & outcome, when enterprises sustain it for long [Also]. This tactic persists & proliferates because people aren't held sufficiently accountable for their words. Not every victim has means for retributive recourse. Soon after the handle deletes trigger tweet, it quickly fades from collective memory, creating opening for a repeat act, deepening the cut.
One option Twitter could explore to arrest it, is to prevent users from deleting Tweets. Once a user realises the permanency of published words, the permanency's possible ramification on self, it would act as a deterrence towards attempt at malice. It would gel well with it's own anti-censorship ideals - users becoming more responsible, Twitter wouldn't be pressurised to censor. Any trigger tweet still out there would marshal backlash towards propagator, with no way out.

Of course, one can be genuinely mistaken, inadequately informed at the time of tweeting. To address this, Twitter could allow users to append a clarification, with unchanged URL, retaining visibility of the original tweet, contained within it. To ensure well-thought follow-up, it could allow user to offer clarification once per tweet.
This should encourage more responsible engagement, including disagreements, on the platform, discouraging it's use as a propaganda tool at the hands of Deep Pocket entities.
Godspeed
Also Read: Goose, Ganders And Mongrels