CABS, the lead organisation in the Defence Research & Development Organisation's [DRDO] efforts to develop India's own airborne surveillance platform, is mandated to produce 3 such systems for use by the Indian Air Force [IAF]. The system has been conceived around the specially modified Embraer ERJ 145I aircraft, being acquired from Brazil. Two of these are said to have reached India, while delivery of the third is expected in December, this year. As with any system, its continued smooth operation in service would depend on being regularly maintained & repaired by authorised entities. Thus, as part of the development process itself, CABS has initiated steps to identify such an organisation within India, capable of providing service support to the AEW&C, once it has been inducted, ideally through its entire expected life-cycle of around 20-30 years. 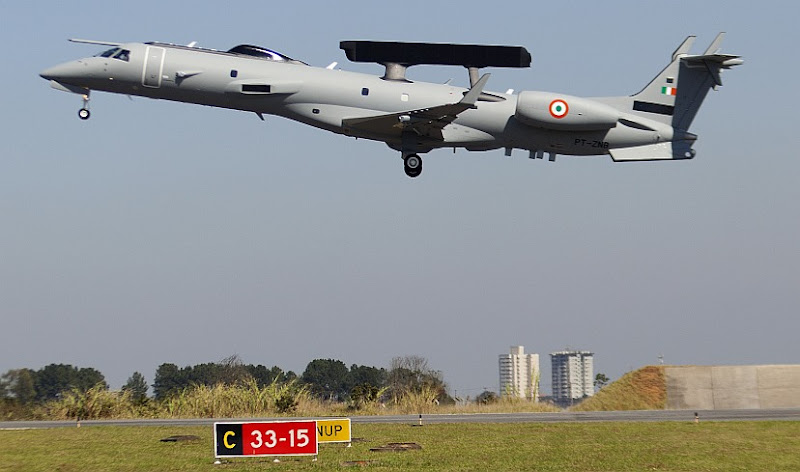 The institute had, at around this time, last year issued a Request For Proposal [RFP] to organisations in India, referred to as the Engineering Life-cycle Support Agency [ELSA], who would be capable of taking up the job. The Statement Of Work [SOW] document issued along with it explained the nature of the task that would need to be undertaken. It also provided some newer bits of information about the AEW&CS' features & capabilities. Each aircraft, for example, is to have 5 Operator Work Station [OWS], whose functions could be re-configured to suit the nature of the mission being undertaken by simply updating it with mission-specific software. The platform's Primary Radar [PR], an AESA* system, a part of which would be mounted on top of the aircraft [AAAU*], in addition to being able to detect & track airborne & land-based target, also has a sea-mode for performing the same for water-borne targets. The PR antenna is capable of providing a total coverage of 240o - 120o from each side of the array mounted on top of the aircraft. While the PR's role is to track targets, it would be the job of a dedicated Secondary Surveillance Radar [SSR] to authenticate whether the target is a hostile or not [IFF*].

Both, Inertial Navigation System [INS] & Global Positioning System [GPS] would be available, for providing positional information needed to fly the aircraft, as also to the mission hardware. There appears to be no takers in DRDO for the signal being beamed by the GLONASS constellation. Curious, given that the Indo-Russian BrahMos, land-attack Supersonic Cruise Missile makes use of it. The Russians have also offered India a partnership in developing & expanding the fleet. Perhaps, it could be made part of a future upgrade programme, once developers are satisfied with the system's reliability, but more importantly, continued viability. There could also be an issue of compatibility with the other, Western sub-systems, incorporated into the AEW&C system. A future upgrade plan would also like to see the ability to use signal from the indigenous Indian Regional Navigational Satellite System [IRNSS] constellation, whose first satellite is expected to be placed into orbit shortly. 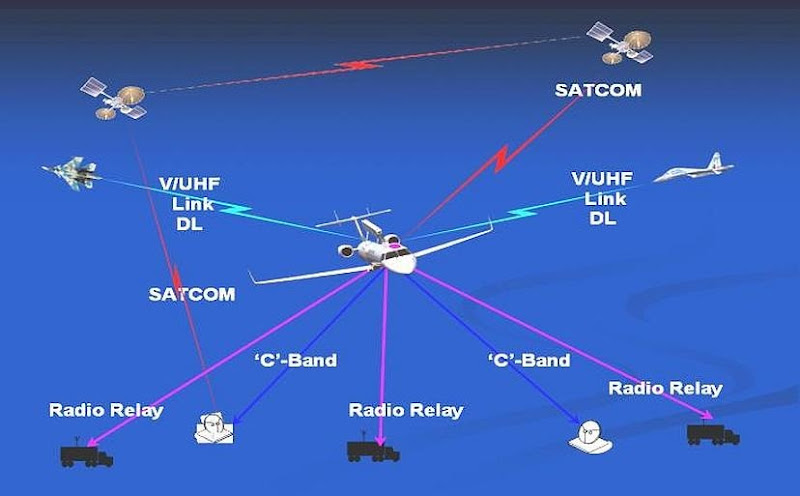 Communication & data transfer needs on-board the AEWCS would be taken care of using multi-frequency transceiving systems. Each OWS, for example, would have V/UHF Software Defined Radios [SDR] for air-to-ground & air-to-air communication. Line Of Sight [LOS] transmission of Mission Data between the aircraft & its Ground Control would be enabled using a data-link operating in the C-Band of frequency spectrum, whereas beyond LOS transmission would be carried out with a Ku-Band based Satellite Communication [SATCOM] datalink. In addition to the 5 SDRs for the OWS, the cockpit too would be equipped with two such radio sets.

These aircraft would be supported by a host of ground-based systems, also being developed as part of the programme. These include,

The feature sets stated appear standard when compared to contemporary systems already in operation with the West. What, however, one musn't lose track of is the legacy of the West's military development programmes - many decades of well-funded research, as compared to that of India's - a still-fledgling attempt initiated only much recently. Moreover, the knowledge of these technologies is something that its possessors would not part with. Thus, each nation desirous of acquiring them would pretty much have to re-invent the proverbial wheel each time. Keeping this in mind, the system CABS is attempting to develop is quite a remarkable endeavour. The incorporation of SDR for communication is especially note-worthy. It remains to be seen whether these units are being acquired off-the-shelf or if one of the labs/DPSU has been able to build indigenous ones. SDRs were something the previous DRDO Chief had, one a few occasions, stated, the organisation was working on.

CABS has broadly classified the maintenance & repairs involved into two categories - one involving the flying aspect itself of the aircraft, that would be taken up by Embraer, and the other that of the mission-specific systems. It is the latter for which it is seeking a partner. In order to ensure the contract awardee is up to the task of doing the job, CABS would pretty much be hand-holding it through the learning phases, to help it gain understanding & proficiency. The ELSA would initially start with assisting CABS in integrating the system on a ground-based validation platform, called the System Test & Integration Rig [STIR], before actual work on the aircraft can begin. As of now, CABS personals themselves are said to be doing the same. Following this, it would then assist CABS in integrating the systems on the first aircraft, in the process also liaising with the different vendors & suppliers presently 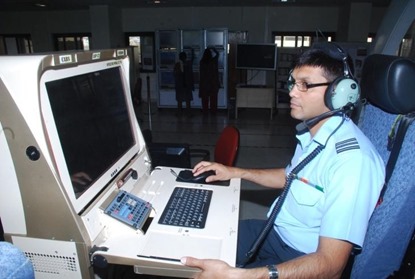 selected by CABS, in addition to the multiple DRDO labs involved in the programme. Having completed them to the satisfaction of the DRDO, the ELSA would then take the lead in carrying out system integration on the remaining two airframes, with CABS stepping back, playing a supportive role to the contractor's team of Engineers & Technicians. Once integrated, its envisaged that ELSA would have a assisting role to play in the certification of the AEW&C, that would be carried out by CEMILAC* & DGAQA*.

The ELSA would also be responsible for maintaining & updating the documentations, drawings & instruction manuals to be used in operating it, as and when necessary. Another one of the responsibilities of the contractor would be to impart recurring maintenance training, as well as training to operate the mission system to new batches of IAF personals. While only CABS shall have the authority of purchasing the spares needed, it would be the job of the ELSA to manage their storage, transportation & handling, besides studying their consumption pattern & requisitioning CABS to place orders for more. Once appointed, the ELSA would have to take up responsibility of maintaining the mission system at all the three levels - 'O' Level, 'I' Level & the 'D' Level, that denote increasing orders of maintenance capabilities, at the designated centres.

CABS is expected to keep one of the AEWCS with itself, using it for further development. Thus, the IAF would initially operate only two of these surveillance/C-n-C systems, which the document states, is likely to be based primarily at the Chandigarh airport. The basing decision might indicate that the IAF envisages this platform, with their stated capabilities, to be suitable for its requirements, vis-à-vis, monitoring activities across the Western border, with the more powerful Israeli systems mounted atop the Russian Il-76 being devoted for more pertinent surveillance requirements, elsewhere. Given the shallow depth of the geographical extent of the country on the West, the indigenous AEW&CS' capabilities, operating from much inside the Indian territory, as is the norm, would appear to be adequate in meeting requirements. A decision could be taken, at a later date, to transfer the third aircraft too to the IAF.

At the time of releasing the RFP, last July, CABS had stated the timeline of the work involved, that would require the ELSA's participation. It was divided into 3 segments:

Phase 03 contract is beyond the scope of this CABS-issued RFP, as it would have to be negotiated between the IAF & the ELSA.

Abiding by this timeline, the IAF would have begun operating these aircraft starting April 2014. However, since that time, submission

& opening of tenders have got postponed to June 14 of this year, thereby pushing the induction dates too by one year, at the very least. Now, assuming there are no further delays, CABS' programme would enter Phase 02 only at around 2015 / 2016, which would be when India's first indigenous AEW&CS would enter service with the IAF. Subsequent decision taken could see more such AEW&C systems, based on the Embraer platform, being inducted into service. The maintenance & service contract for these aircraft too could logically go to the ELSA selected for the first three aircrafts, though no mention of this has been made here.

According to the information released by DRDO, the eight companies, all based in Bangalore, which have responded include:

Of all the companies that responded, the state-run HAL would appear to have the best chance of winning the contract, given their 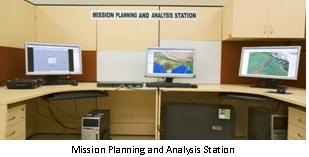 vast experience, existing infrastructure & a human resource pool quite unmatched by others. But the state-owned Aerospace monopoly also suffers from an already overflowing work order, inordinate delays in meeting prior commitments & other diversification plans that are likely to affect  the company's ability to honour this contract, if awarded. Given the relatively small, even if significant, nature of the contract of three aircrafts at this stage, it could be a major leap of faith, with the possibility of rich dividends, if the contract were to be awarded to one of the bidders from the private sector, for whom successful execution of the contract would be as much a matter of prestige, as it would be an invaluable move upward through the value chain. A wonderful opportunity, complementing the Govt's vision of developing a robust indigenous military-industrial setup in the Indian private sector.