An Agni-6 ICBM-class Missile By India. Yes? No?

One missile that could be many.

On December 26, 2016, the country's Defence Research and Development Organization [DRDO], successfully carried out its 4th consecutive developmental launch of the Agni-5 Ballistic missile. With a stated range of "more than 5,000 kilometres", carrying a 1,000 kilograms warhead, the missile can reach Harbin, the furthest economically significant city of the People's Republic of China [PRC] - it's primary target, when launched from somewhere in India's North-Eastern regions. It also marked the 2nd consecutive, successful test of the Missile from a canisterised, road-mobile launcher, mounted on a 'Transport-Cum-Tilting' [TCT-5] vehicle, equipped with an on-board 23 kVA diesel generator. 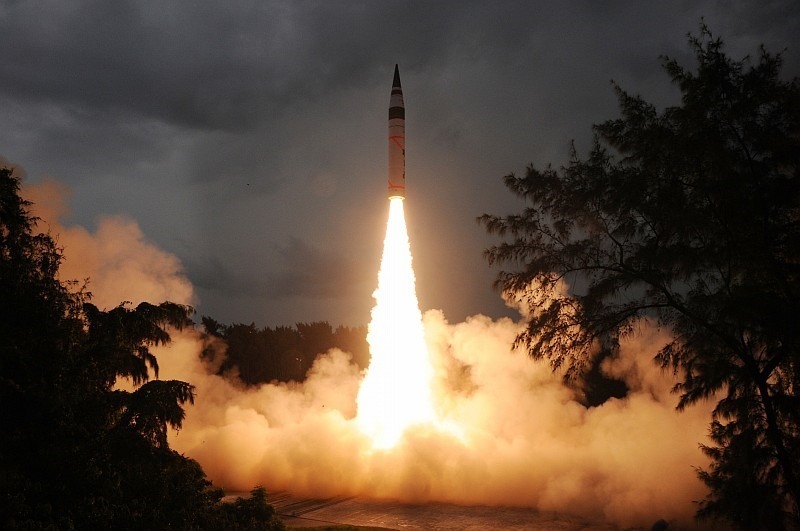 The significance of this configuration isn't lost on India watchers. With the missile available to the country's decision-makers in this form-factor, they now have, at their disposal, a convenient, standalone, road-mobile weapon system that can be launched with the minimal of preparations, enhancing the survivability, & versatility of India's strategic deterrence. Each such hermetically sealed missile would have a shelf-life of a decade. At the time of composing this post, India has also announced a successful user-trial of its Agni-4 Ballistic missile, carried out by the country's Strategic Forces Command [SFC].

With the Agni-V's course of development now, more or less, on firm footings, the question one asks is, now what? Some argue that DRDO is pursuing development of the Agni5's numerical successor, the Agni-6, ostensibly, with a range of up to 10,000 kilometres. Additionally, it's warhead configuration would, either, be a Multiple Independently targetable Reentry Vehicle [MIRV] or Maneuverable Re-entry Vehicle [MaRV] type.

Information available on Govt. of India websites also support these views. For example, reporting the December 26 launch of the Agni V missile, the Press Information Bureau [PIB] writer stated that, "India has also started working on Agni-VI.  It will be capable of being launched from submarines as well as from land, and will have a strike-range of 8,000–10,000 km". In 2013, while encapsulating the Ministry of Defence's annual achievements, the PIB wrote,

"After successful test firing of Agni-V, DRDO now aims for 10,000 Km range Inter-Continental Ballistic Missile (ICBM), which according to its Chief would be preceded by above 6000  Km range Agni-VI to be launched soon."

The DRDO Chief at the time of that test was Dr. Avinash Chander. Then Chairman of the Armament Research Board [ARMREB], Dr. SK Salwan, has also reiterated that, saying, "beside the Agni-VI's ground version, the DRDO is simultaneously working out on its underground variant". Here, assuming 'underground' actually meant 'underwater', or a submarine-launched version.

That being said, no launch of the Agni-VI has been carried  out, till now. Even the, then, DRDO Chief Dr. VK Saraswat had admitted to there being no governmental sanction for any 'Agni 6'-named programme. "Agni-6? What is the Agni-6? I have not heard of such a programme", seemingly replied the current Chief of DRDO, Dr. S. Christopher, when asked about the missile recently.

In matters of a nation state's strategic affairs, a degree of ambiguity & obfuscation are as big an asset, as the physical, nuclear-tipped arsenals themselves. Therefore, it is unlikely that one would get any definitive official confirmations or updates on such matters. One can, however, draw informed inferences, based on the generated ripples.

When one talks of the Agni-VI missile, one primarily speaks of incorporating three featural enhancements - range, delivery system & warhead.

Each successive Agni-series missile has had a stated range increment. While Agni-I's is in, more or less, certain terms - 700 kilometres, or thereabout, Agni-II has a declared range of "more than" 2,000 kilometres, & so on, & so forth. The latest iteration, Agni-V's range is purported to be "more than" 5,000 kilometres. The phrase "more than" gives India wiggle room to tweak the range, without raising the imperatives for friendly world capitals to raise public alarm, least they appear to be seen as unresponsive to a development that could affect them. Thus, an Agni-5 missile of range of 5,001 kilometres is just as truthfully more than 5,000 kilometres, as is a 10,000 kilometres-range Agni-5.

It is a common belief among analysts that India under-reports the range of its Ballistic missiles, what with its liberal use of "more than"-s. The Chinese had, in fact, gone on record stating that the Agni-V can, in fact, lob warheads 8,000 kilometres away from launch. Such an assertion is not surprising, given that the PRC's own Dong Feng 31 [DF-31] missile, with comparable dimensions performs that way. Put a smaller, lighter warhead on top, & the A5 missile would travel much beyond the 8,000 kilometres.

To argue, therefore, for pursuing development of an Agni-6 named missile, would be moot. The existing Agni-V missile can, without much hullabaloo, reach those distances. Continual improvement in the technologies incorporated in the A5 can, conveniently, help augment the missile's range parameters. Incorporating greater use of composite materials to build the missile's body, for example, replacing the metallic parts, would help reduce its overall weight, thereby improving fuel fraction &, consequently, its range.

The Agni missiles, a progression of the IGMDP, have all been land-based systems. A notable exception to this has been the Dhanush, derived from the IGMDP-conceived Prithvi Short Range Ballistic Missile [SRBM]. A stop-gap, quick-fix measure, giving the Indian Navy Nuclear capability, on paper. However, an unstable liquid-fuelled missile, launched off the deck of a vulnerable surface warship isn't an ideal, contemporary Naval solution.

Deployment of the multiple, submarine-launched K-series of missiles, currently under development, would make the Navy a true-blue, atomic deterrence force. With this in view, it would, therefore, add no value to undertake parallel development of any submarine-launched Agni-variant. To be sure, technologies developed as part of the Agni programme would find its way into the K-series too, notably its Ring Laser Gyroscope-based Inertial Navigation System [RLG-INS], Flex Nozzle-based Thrust Vector Control systems, System On Chip [SOC]-based guidance controls, among others. The secretive, submarine-launched K-5 missile, with a rumoured range upwards of 6,000 kilometres, could be the underwater variant of the Agni-6 missile, that writers & Govt. officials have alluded to.

Such a missile, arming India's future SSBN submarine, loitering undetected, for lengthy time periods, in any one of the unspecified Oceans, far away from Indian shores, would be able to rain Mutually Assured Destruction [MAD] on an adversary, upon receiving due instructions. Range extension of such a SLBM, beyond 5,000 kilometres, can be explained to allies by the area of operation of any SSBN boat, far away from the scene of action.

India, with its No First Use [NFU] doctrine, requires massive & fool-proof second-strike capabilities, to lend credibility to its Nuclear posture. Its must, for example, be able to successfully penetrate any Ballistic Missile Defence [BMD] that the adversary may activate, in anticipation of India's retaliation. MIRV & MaRV based warhead configurations would provide the ideal counter-foil for any such BMD shield. The DRDO has, on multiple occasions, spoken of undertaken R&D towards realisation of these technologies.

The Agni missiles, with their modular design, starting with the A-III *, should be able to accommodate such warheads, once developed. The country's decision-makers could, then, decide on the number of any given type of warhead to be mated to the missile, prior to their deployment. Such missiles, with a variety of compatible warheads, would likely retain their legacy nomenclature.

India is unlikely to deploy or test any Agni 6-named Ballistic missile, at least not one with any stated range-enhancement. What we are likely to witness, instead, is the assimilation of technologies, being attributed to the A6 to, either, yet-to-be-tested missiles or, as future variants of existing missiles. This would serve the dual purpose of bolstering India's strategic deterrence posture, without appearing to upset the global applecart.