Success has thousand fathers..err mothers too 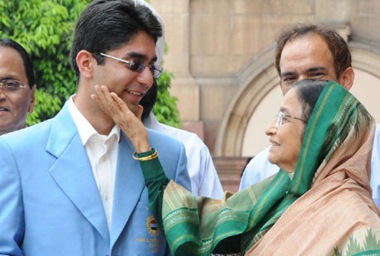 The other day while watching telly, I had tuned in to the News channel, when they were covering Abhinav Bindra’s meeting with our Prez. Posing for the photographers, the lady [our honorable (lol!) President] held  up the medal in front of her with a silly grin plastered on the face. My first reaction – “How dare you bitch!” “Ma’am, you haven’t earned the right to hold the sacred medallion. Please do not desecrate it by touching”.

On way to the college, I see many a walls plastered with posters of sundry politicians sharing poster real estate with the country’s toast of the season. Most did not even bother to use a recent, much older looking, picture of the guy. Instead, what we see is a scared looking pre-pubescent kid being towered over by an evil-looking, stupidly grinning criminal-turned-politico on those posters.

The National Rifle Association of India holds press conferences to proudly announce how their protege has done what no other sports association [save Hockey, which is a team sport] has been able to do in 61 years of our independence. This is the same Association which has been unable to ease the import process of bullets needed by our shooters. As a result our shooters, it is known, practice with just one-third the number of bullets, their International counterparts use. It is the same Association that refused to send our shooters for extended training camps to Germany, which undoubtedly posses much better training infrastructure. Yet when it came to basking in the laurels of a victory, the Association is the first one to take credit. They very conveniently  chose to omit mentioning that the victory is a result of largely self-funded efforts. Abhinav comes from an affluent family which enabled him to pour in his own resources for his training [his folks built him his own Olympic standard shooting range for unhindered practice]. This, after the babus made him run pillar to post seeking funds and then refusing to pay anything more than a joke of an amount [SAI paid 15 lakhs, when he needed 2 crores for his new rifle, so said the TV report].

Government of states far and wide are clamoring to shower him with cash prizes for his Olympian efforts. Without grudging him even one bit of the prize money that has been announced, but the question that begs to be asked, is it of any significance to exhibit such monetary appreciation now that he is worth two crores.

This is nothing but a shameless, opportunistic, self-serving maneuver that politicians are resorting to in order to achieve their own populist ends. Where were they when Abhinav was seeking the much needed funds for his training. Why were no glittering ceremonies organized by a state to announce its support for the shooter. The answer is quite simple – no state came forward to support this shooter prior to his victory.

Would the same amount not be better spent ramping up the respective states sporting infrastructure which currently bear close resemblance to a rat hole. Why are they not using that money to fund the training of some very talented but unproven lad/lass who is sure to earn laurels for the country if properly guided. Players who in the distant past had rendered yeomen service to the country are now languishing in abject poverty [blessed are those who have passed through the pearly gates]. How about helping re-train that athlete who misses qualification/winning by 1/100th of the second – an outcome of immense talent practicing with pedestrian facilities.

These vermins care a damn about the people whose responsibility they have been entrusted with. But the moment they achieve something, they rush forward to associate themselves with them & their achievements telling anybody willing to listen how they have created a medal winner. We all like to associate ourselves with a winner – makes us feel like a winner ourselves, efforts notwithstanding.

Success has a thousand fathers…failure is an orphan.

How very true does this statement hold in our country.