"Life is a cycle, that the cycle made evident"
~ Rumi

Growing up, traversing the city extent on a bicycle, the yearning to ride a bike was strong. Bike ridden, the desire for car made a forceful presence. That also fulfilled, to the extent that it now feels like a chore intracity, the longing for a cycle made a strong comeback.

Following a week long deliberation & exploration, brought home a Firefox Rapide 21S. Cost me ₹23,900/= INR [~$317 USD]. Took me some time to come up to speed with contemporary offerings. Once onboard with the tech, spec & make, made a note first, of certain conformance parameters for adherence. 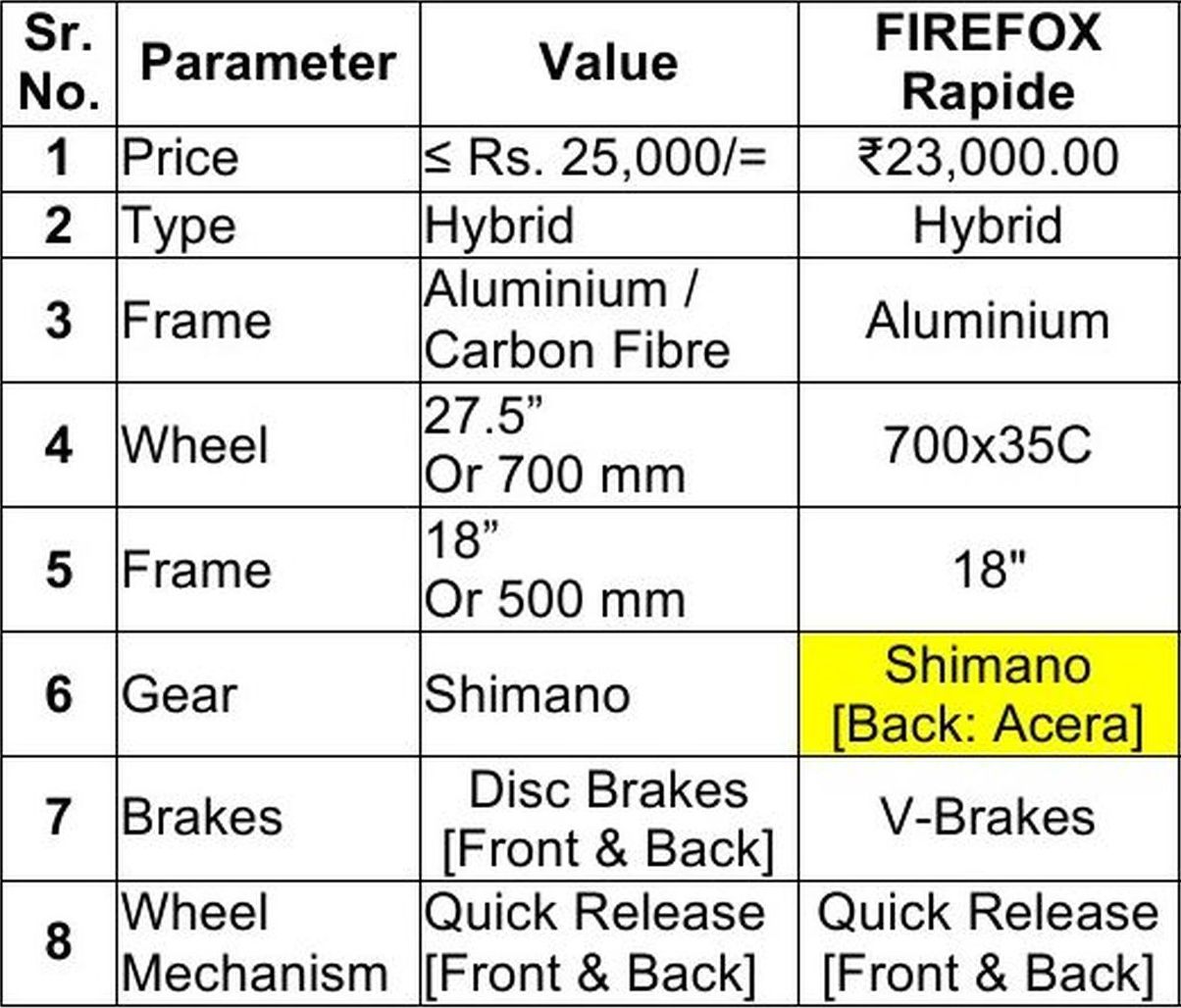 Decided to purchase it offline. Reason being, the Co. has been kitting it's newer batches of this cycle with Microshift-manufactured Derailleurs, as opposed to the earlier, which had Shimano's. While browsing the Interwebs, understood that folks overwhelmingly seemed to prefer the Shimano. Additionally, Shimano's Acera-series is a higher quality product, that was unavailable in any other offerings at that price point [TIL: Tourney < Altius < Acera < Alvio < Deore < SLX < XT <XTR]. Contacting the OEM, they confirmed that the pandemic-induced Supply Chain bottleneck issues prompted them to shift to Microshift [left unsaid, but online speculation - cost-savings too]. They assured comparable performance with the new derailleur kit. As someone pointed out, "A bad riding experience will be the thing that stops you from cycling". The Shimano Shifter felt instantly intuitive, with it's dual Thumb-Index Finger operation. The Microshift Shifter indicates only the extreme Gear positions on it's dial, leaving the rider to speculate when riding in intermediate position. It's single thumb-only operation for raising-lowering the Gear also would require some getting used to. 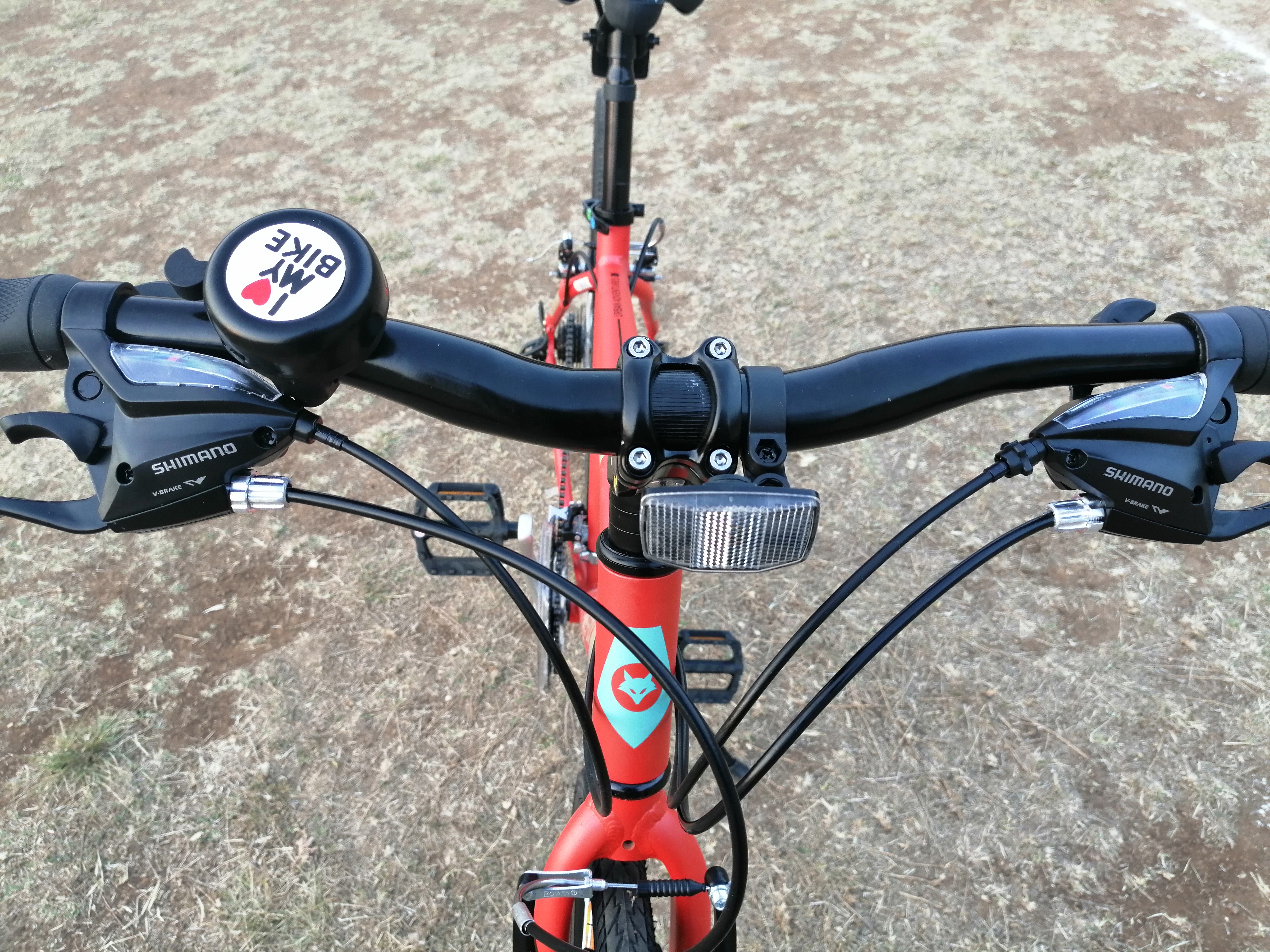 Thus, wanting to play safe, I decided to visit the offline market. As luck would have it, a neighbourhood store had the Rapide 21S in it's original Shimano configuration. A little back-forth later, finally arrived at the agreed upon price. Added a Bell & purchased a helmet & cable lock for an additional Rs. 1100/=. Noticeably, though, it does not come with Disc Brakes, that I'd have liked to have. Lure of better quality Sprocket & shifting mechanism prompted this settlement.

Despite not having ridden a bicycle for more than a decade, moment backside touched saddle, became one with the machine #Hyperbole. Started off tentatively. Gradually, over 30 minutes of riding, became more comfortable, confidence increasing with each ride. Reverting to pedal power after so many years needed some calibration to on-road practices. Stopping at the first signal, for example, I initially halted a healthy 4 metres from the Car in front, only to realise that this ride offers me the option to move ahead, squeezing through the nooks & crannies between the halted hydrocarbon guzzlers. 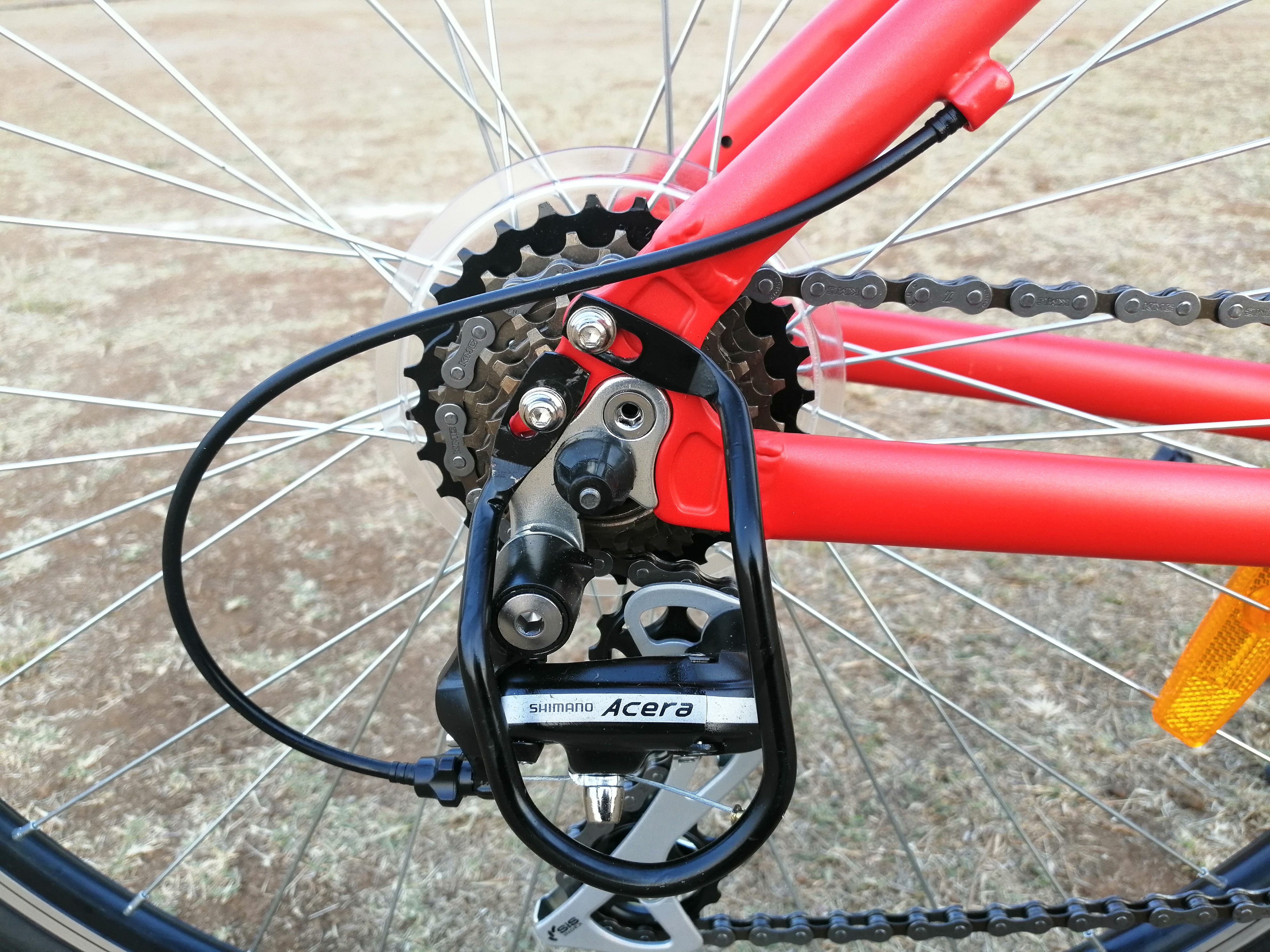 The Mechanic at the Store has advised me not to engage the Gear Shifter for the next 10 days. He has set them in the middle configuration – Front: 2; Rear:4. Clocked a cumulative 4 hours on it, so far, since taking delivery, last evening. Adding the Bell is proving to be a futile expense. The cowl enveloping the Shifter-Brake lever precluded it from being mounted in an ergonomic position. Managing fine, so far, without using the Bell. Necessitating deliberate riding, awareness at "400%". Need to keep an eye out on possible long-term implications.

Ride experience, over the past day, has been fine. Have driven it around the neighbourhood & inside the University campus, both of which have good road surfaces. Pleasant rides. Sitting on it's saddle seat is requiring some extended re-acquaintance. While not uncomfortable per se, the Gluteus Maximus would have better appreciated a softer material on the seat. Decided to observe it more, before casting the conclusion in the Foundry. It's handle sleeve fits nicely in the palms of the hand, matching it's contours. 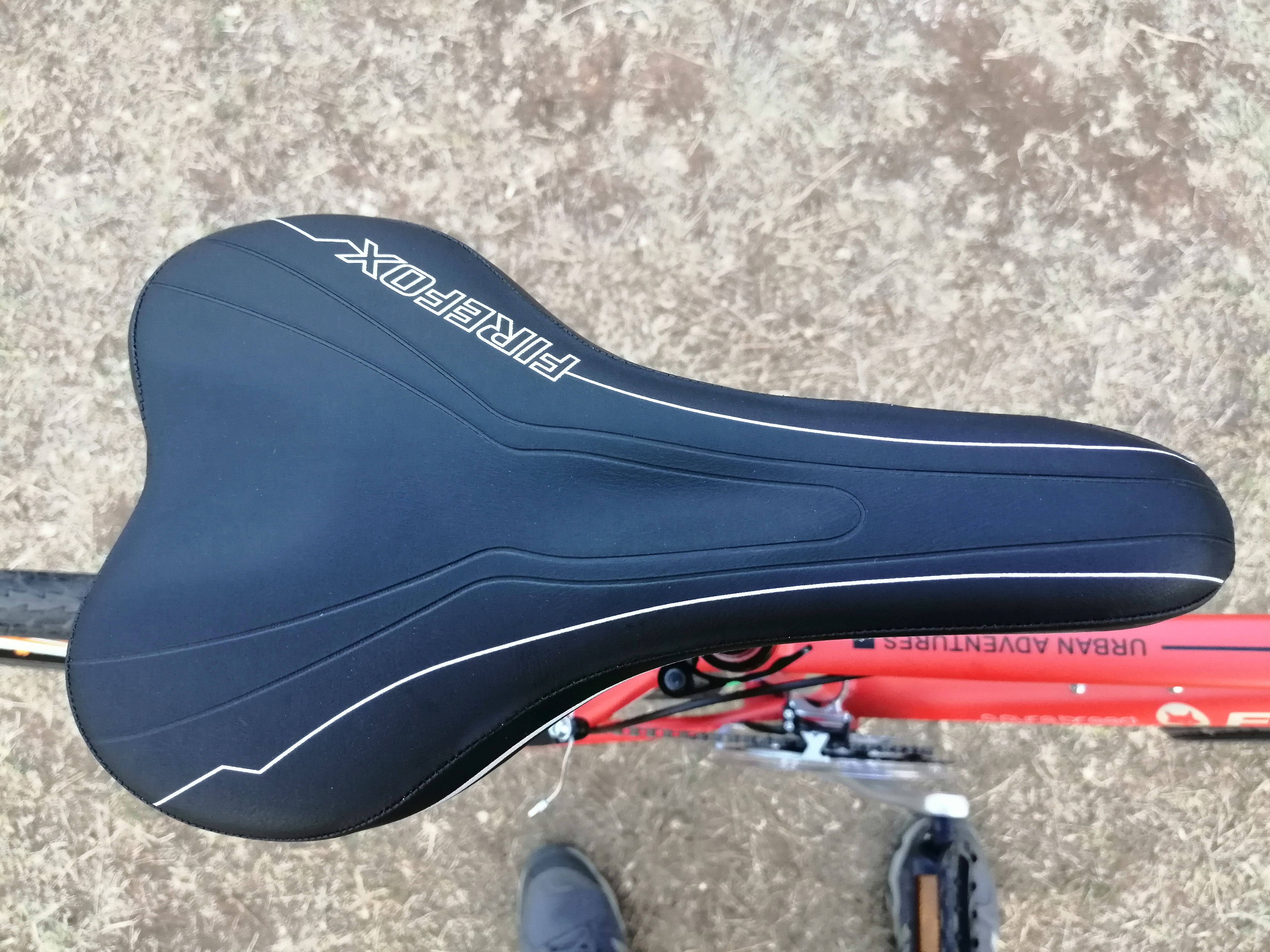 Firefox enjoys a fairly good reputation in India for manufacturing cycles, incorporating good quality material in it's builds. It's transmission Chain, for example, is KMC-make, another well-regarded company. It's network of Service Centres is also expansive. This is especially critical, given the realisation that cycle repair stores are no longer as common, as earlier, when one could find one sitting under every other tree, with a pail of water to fix your punctured tyre. Now, trees are a doing a disappearing act. 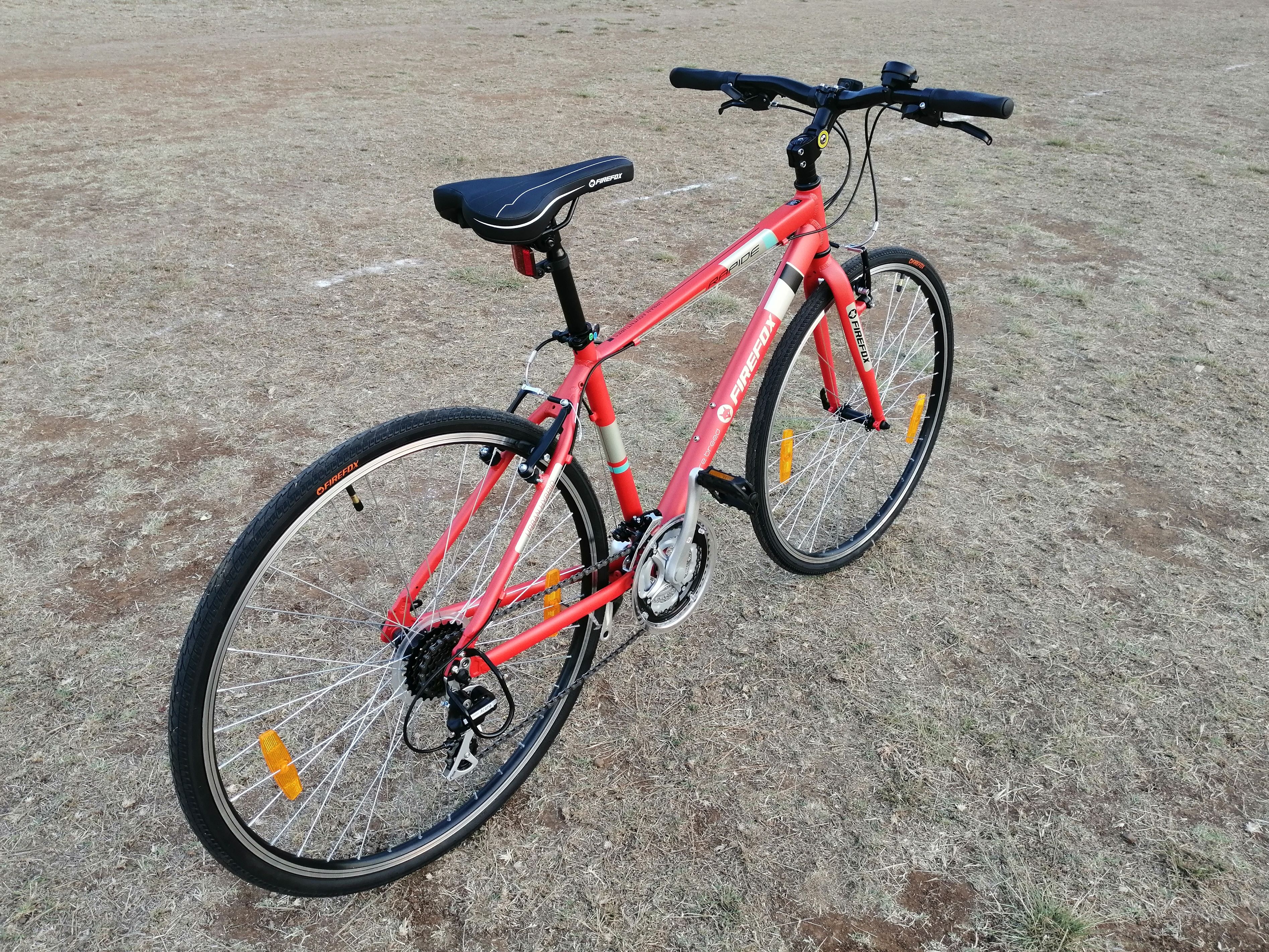 All said, bicycle prices have moved North over the past 2 years. Earlier, the Firefox Rapide was the go-to Hybrid bicycle in the sub-20K bracket. With the ongoing return-back-to-Normal process in play, one can expect prices to slide back South next year.

Plan to share views about the bicycle after a more extended time riding it, say after 6 months. While exploring options, was maintaining a Spreadsheet comparing specifications of Bikes I was coming across. These, from that list, are comparable alternatives, within that price point.

Happy riding, to self.