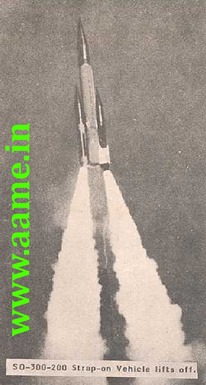 The primary enabler, presently, of Indian-designed Satellite Launch Vehicle's [SLV] ability to place heavier satellites into orbit is, what is known as, Strapon Motor or Strap-on boosters. Seen attached externally to an otherwise pencil slim rocket, these provide the launchers with extra thrust, right at the commencement of the flight, needed to propel heavier payloads into orbit. Subsequent to the thrust provided by it, the rocket's core stages kick in to take the satellite up the rest of the way. If the payload isn't heavy enough, one can do away with it, as is done by ISRO. The need to use these are a function of the engine design & propellant used in it.

October 16, 1985 saw the first Indian designed Strap-on rockets successfully take flight [see left]. These thrust augmenter were fashioned out of the Rohini-series of Sounding Rockets - the larger RH-300 functioned as the core, while 2 RH-200 rockets played the role of the strap-on. Taking up from the names of these two rockets, the test system was designated SO-300-200, where SO stood for Strap-On. Important among the parameters that were tested involved launching in a 'Zero Burn' mode, that saw the rocket take-off from the ground using only the strapon. Also tested was the time-delay deliberately induced in separating it from the core at the end of its operation. This separation process involved use of spring-loaded explosive bolts that connected it to the core using ball & socket joints. It, therefore, permitted random angular movement of up to 10o without causing damage1. While no satellites were put atop this one, its payload consisted of the self-destruct mechanism & instrumentation systems needed to evaluate the test. They were carried, both on the core, as well as one of the strap-on rockets. The other strap-on, thus, had dummy load put in it to maintain weight symmetry.

This is also the answer to a question put a little while back. 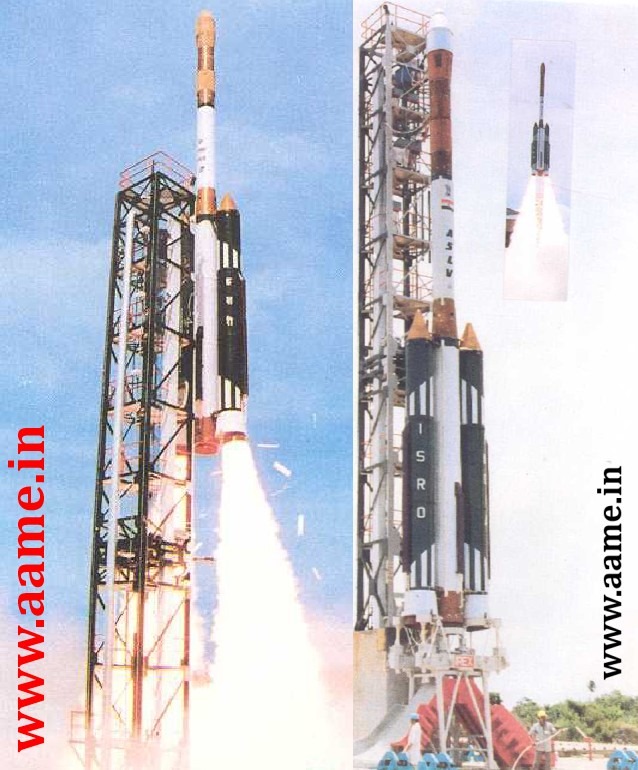 This test, among a host of others were conducted in preparation of the maiden test-flight of the Indian Space Research Organisation's [ISRO] Augmented Satellite Launch Vehicle [ASLV]. Primarily a Technology Demonstrator [TD], derived from the earlier Satellite Launch Vehicle 3 [SLV-3], ISRO carried out 4 test-launches of the ASLV. It served as a platform to validate systems & technologies that were needed for ISRO to realise its bigger goal, that of developing the commercially relevant Polar Satellite Launch Vehicle [PSLV]. Critical among the sub-systems developed was the concept of strap-on boosters. The ASLV was the first full-scale Indian rocket to sport these. As a result of its addition, India's launch capacity acquired a 3-fold jump, now capable of placing a 150 kg payload into the Low Earth Orbit [LEO]. These strap-on motors were required to function for 55 seconds, lifting the ASLV up to an altitude of 15.8 kilometres4, reaching speeds of Mach 2.5 at the end of this stage [ASO]. The Strap-on rockets were essentially same as the 1st stage rocket used in the SLV-3, albeit having its exhaust nozzles canted at an angle of 9o±5' 3. Also, by that time, the country had succeed in developing the better HTPB-family of solid propellant, which then replaced the PBAN used in the SLV-3's 1st stage5. The fuel is arranged in the rocket in a 'Star' shaped pattern, to allow optimum radial burning. As part of the ASLV program, it also had to develop a host of software, crunching numbers by applying Numerical Methods, to address different aspects of the flight. To study the issue of the Strap-on's separation Dynamics, for example, it developed the 'Test Oriented Strap-on Separation' [TOSS] software, that used input from the data generated from Wind Tunnel Testing, to help fine tune the design2. The maiden flight of this experimental launcher took place on 24th of March, 1987, less than 6 months after validation of Strap-on Rocket motor concept, mentioned above. Being a test platform, ISRO announced complete success of its 4th mission, the ASLV-D4 that lifted-off on the 4th of May 1994, culminating the program on a high note.