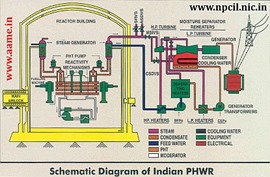 The Indian programme envisages building commercial scale electricity generating Reactors that operate on a broad spectrum of Nuclear cycles. These include the thorium-utilising Fast Breeder Reactors & systems for harnessing the power of Nuclear fusion, Work is also underway for developing Compact High Temperature Reactor [CHTR] that could provide electricity to regions not connected to the grid & be utilised for large-scale generation of hydrogen.

While these systems reside, somewhat, in the realms of the "exotic", NPCIL has also 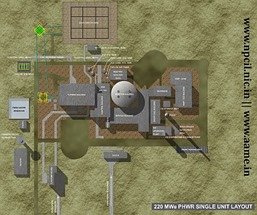 developed & deployed indigenous power plants utilising the more prevalent nuclear fuel cycle, with its Pressurized Heavy Water Reactor [PHWR]-series. "Burning" natural Uranium, the 1st of its Reactors became operational on the 1st of January 1991. Since then, NPCIL has been successful in scaling up the design.

Currently PHWR plant designs exist in 3 power ratings - 220, 540 & 700 MWe. While the 220 & 540-rated reactors have been in operation for many years [the 1st 540 MWe design began operation in 2005], work on setting up the larger 700 MWe plant continues at the sites of Kakrapar & Rajasthan power-plants. They are expected to start electricity generation in 2015 [Rajasthan, 2016]. Unlike the earlier 2 types, the 700 MWe-reactor will use Slightly Enriched Uranium [SEU] as fuel. In addition to the 4 reactors being set up at the 2 locations, 16 more of these advanced PHWR designs are being planned for construction at 5 locations.

In this NPCIL presentation, the 3 designs have been compared, highlighting their key features & technologies, including safety aspects. In keeping with best practices, critical functions of the reactor have been equipped with dual-redundant systems, for fail-safe operation. In order to realise the PHWR, it developed & demonstrated manufacturing processes & systems requiring compliance to exacting standards. These include ultra heavy forging, zero-leak high discharge canned rotor pumps for circulating the heavy water, automated on-power refuelling machine, all requiring manufacturing adhering to the highest Class-1 standards.

The PHWR is also playing its role, serving as a medium for engaging in International relation, be it a suspected export to Bahrain, or a more confirmed joint study undertaken, in this case, with Vietnam, among others.