Am getting a wee bit restless*, now that it is way past the January 2011 deadline that had been set for submitting the Failure Analysis Committee's report. The committee had been constituted to look into the aborted flight of India's Geosynchronous Satellite Launch Vehicle [GSLV] F-06 that had been planned to carry & place the GSAT-5P communication satellite into orbit.

All that we have go with now is the statement that mechanical error, possibly caused by vibrations, resulted in the connectors needed for carrying data, to get snapped, which lead to the failure, and not any inherent design flaws in the Launch Vehicle itself, per se.

"The finding of the Preliminary Failure Analysis Team is that the primary cause of the failure is the untimely and inadvertent snapping of a group of 10 connectors located at the bottom portion of the Russian Cryogenic Stage. Some of these connectors carry command signals from the onboard computer residing in the Equipment Bay (located near the top of the vehicle) to the control electronics of the four L40 Strap-ons of the First Stage. These connectors are intended to be separated only on issue of a separation command at 292 seconds after lift-off. The premature snapping of these connectors has led to stoppage of continuous flow of control commands to the First Stage control electronics, consequently leading to loss of control and break-up of the vehicle. The exact cause of snapping of the set of connectors, whether due to external forces like vibration, dynamic pressure is to be analysed further and pin-pointed."

The same has been confirmed by Mr. CS Harish, during his lecture at the Aero India seminar [towards the end]. The Russians, who had provided the cryogenic 3rd stage for this mission, on the other hand, seem not to completely agree with ISRO's first findings.

Whatever the final finding, which I so desperately hope ISRO makes available in the public domain, it is imperative that corrective measures are taken to ensure safe & successful future launches using the GSLV. A lot of of ISRO's planned programs hinges on the successful operation of the GSLV, including the manned Space mission, Aditya mission to the Sun, & Chandrayaan-2, as also the Mk III version of GSLV that would enable India to cease its dependence on foreign launch services & also itself get into the highly lucrative  business of launching the heavy communication satellites.

Launch failures, or failures in general, in the initial stages are an integral part of of any genuine research & development programme undertaken and, in a perverse manner of sorts, an indicator of the authenticity of the programme itself. Knowledge gained from the data obtained in this aborted mission should help develop a much more robust & reliable system, capable of performing the task it has been designed for. 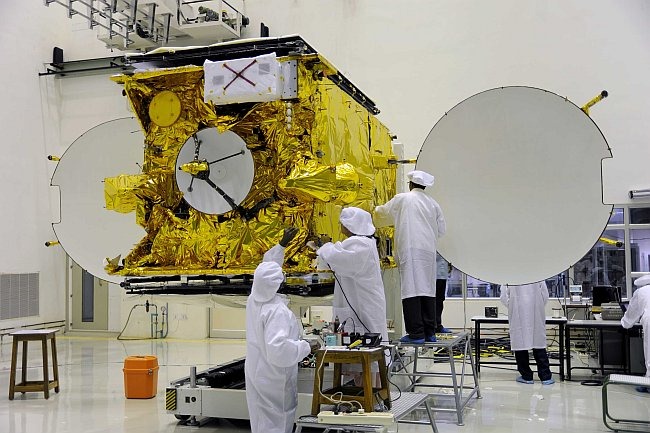 Scientists & Engineers working on the GSTA-5P satellite, which was on board the aborted GSLV F06 launch mission

A pointless post that had to be made to get the restlessness out of the system.